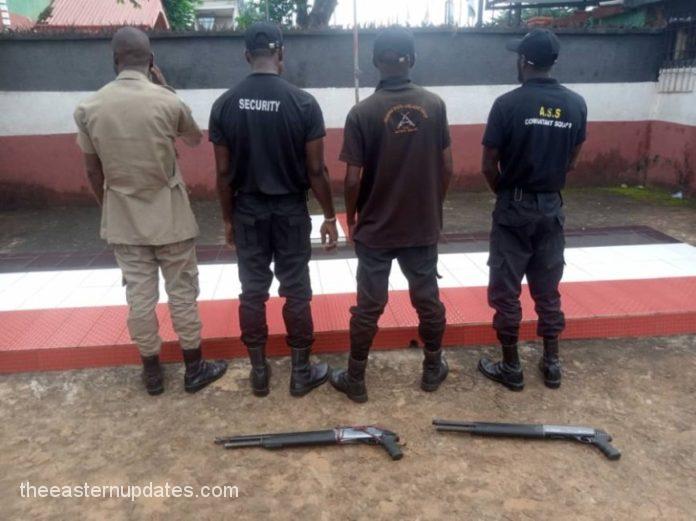 Four individuals have been arrested by the Anambra State police command for operating an illegal private security guard company and possession of guns in Anambra State.

They had also been nabbed by some of the operatives of the state command of the Nigeria Security and Civil Defense Corp (NSCDC) on Tuesday, 6th of September, 2022, the state PRO of the corps, Edwin Okadigbo, said in a statement.

He had identified the names of the suspects as Jubril Isah Samuel, Nzekwe Samson Kosi, Aneke Chidiebere and Egwuda David Ojochegbe. They also possessed two pump action shotguns, he said, adding that ‘they were arrested at various points in Awka following credible intelligence worked upon by the corps’.

Deputy commandant Francis Obinna Nnadi, who is also the head of Private Guards Company Department, who led the operation, had noted that the arrest and recovery of the two pump action guns became imperative following discovery that most of those operating as private security outfits failed to adhere to the regulations governing the operations of Private Guard Companies as stated in the Private Guards Companies Act Cap. P30, Laws of the Federation of Nigeria, 2004 and in line with the NSCDC Act Section 3, subsection b, c, d of 2007 as amended.

In another report, some three police officers of the Nigerian Police have been shot dead by some yet to be identified gunmen in Enugu state.

The Enugu state police command had also revealed that the officers had been on night patrol when they were gunned down.

Daniel Ndukwe, the command’s spokesperson, said the incident occurred at about 10:15pm on Wednesday.

According to him, the gunmen, who were in a Lexus Jeep had opened fire on the moving police patrol van, along Chime Avenue, New Haven, Enugu.

Facebook
Twitter
WhatsApp
Email
Telegram
Previous articlePossible Fuel Scarcity In Eastern Region As IPMAN Blows Hot
Next article2023: My Wish Is For Either Tinubu Or Obi To Win – Umahi