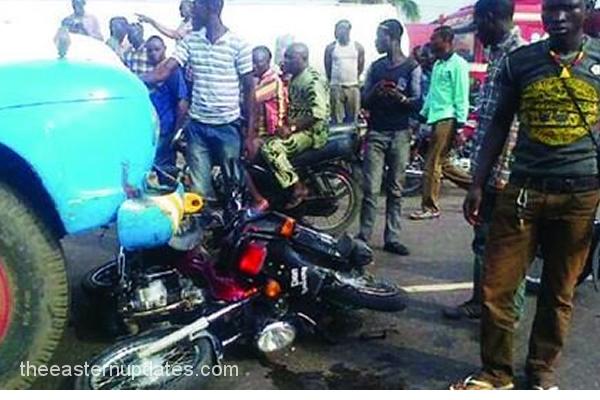 It was a black Tuesday after an articulated vehicle driver killed a motorcycle operator at the building materials junction, Ogbunike, by Onitsha-Awka Expressway.

The Commander, Federal Road Safety Corps (FRSC), Anambra command, Mr. Adeoye Irelewuyi, who confirmed the incident to reporters in Awka, revealed that the accident occurred at about 1.00.p.m.

Irelewuyi said that the driver of the commercial Mercedes Benz truck ran away from the scene.

‘Eyewitness report states that the driver of the truck drove against traffic and hit the motorcyclist, crashed, abandoned his truck and ran away with two of his passengers in the truck.

‘Four persons were involved in the crash, and one of them, the motorcyclist, was killed.

‘FRSC personnel from Nteje took the dead victim to Iyienu Hospital in Ogidi where he was confirmed dead by the doctor on duty and his corpse deposited at the hospital mortuary,’ he said.

The sector commander condoled with the family of the dead and urged motorists to desist from route violation.

He also warned motorcycle operators to avoid plying the expressway.

Irelewuyi said that they were not permitted by law to be on the expressway.