35 Motorists Arrested By FRSC In Imo For Bribing Officers 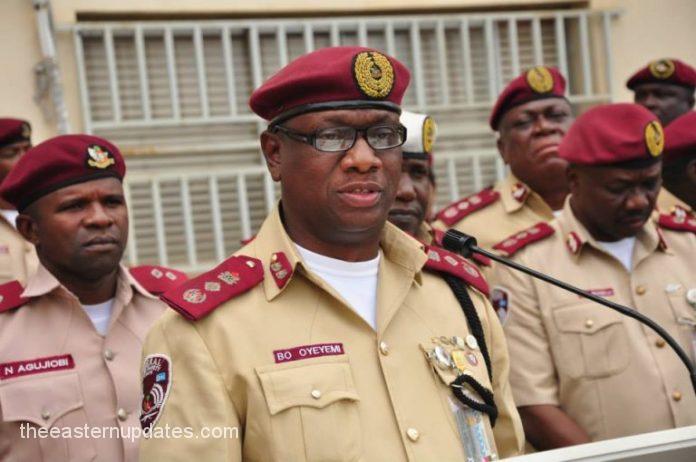 The sector commander of the Federal Road Safety Corps in Imo State, Evarestus Ebeniro yesterday pointed out that no fewer than 35 motorists had been apprehended by his command for trying to induce his officers.

Addressing newsmen at the secretariat of the Nigeria Union of Journalists in Owerri on Tuesday, the sector commander said his command had zero tolerance for corruption.

He disclosed that the arrests made were only for the month of August.

Ebeniro said that his command had mapped out plans to deal with any officer found culpable of engaging in such practice in the state.

He disclosed that the command was ready for the hazards of traffic gridlock associated with ember months, saying that the state government had helped to ease traffic by turning the roundabouts to intersections.

‘Already, we have mapped traffic for the routes into Owerri which is enormous during Christmas. We will deploy men to flashpoints. We will partner with FERMA and other agencies to immediately clear broken down vehicles to ensure flow of traffic.’

Ebeniro assured free flow of traffic and called on road users to drive carefully without the influence of alcohol and substance abuse.

The Federal Road Safety Corps has announced the ban on rotational number plate.

According to a statement on Tuesday, issued by the Assistant Corps Marshal, Bisi Kazeem, it was gathered that the FRSC made the announcement following the circulation of a video of a vehicle that displayed rotating number plates with different detail on either side of the plates.

‘The attention of the FRSC has been drawn to a video circulating on social media which displayed a vehicle circulating with rotational number plates.

‘The vehicle number plates on display are: KUJ-304BV, while the other side which was automatically flipped carries a number tagged presidency with the following details, 01B-266FG,‘ the statement read partly.

The FRSC Ag. Corps Marshal, Dauda Biu, has ordered full investigation into the trend as the FRSC noted that it did not produce a number plate with such double features.