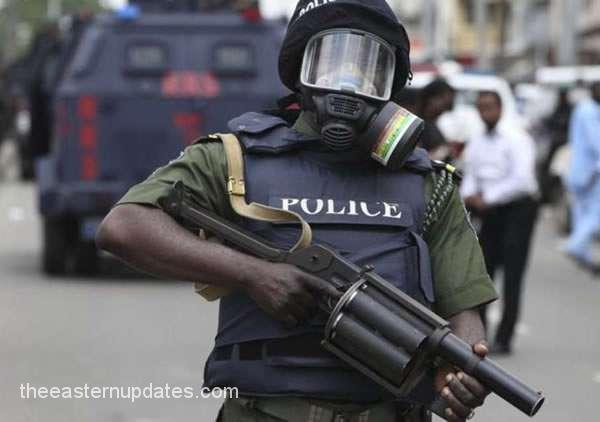 The Ebonyi State Police command in collaboration with the personnel of Ebubeagu Security outfit have arrested four armed robbery suspects who allegedly robbed a man and his agents of money, and other belongings and snatched his vehicle at gunpoint.

A statement issued by the Police Spokesman in the State, SP Chris Anyanwu, on Friday, said the suspects were arrested by Ishielu division of the State’s Police Command on 30th August, 2022, following credible information from the victims.

The statement reads in part: ‘On 29/08/2022, a 911 lorry loaded with palm-kennels was enroute Nsukka in Enugu State. The goods were being escorted by the owner, Solomon Aroh, a-55-year old man from Udenu LGA, Enugu State in his Lexus SUV with Reg No.JJ 149 KL.

‘On getting to NIGERCEM, Nkalagu area in Ishielu LGA, the lorry broke down and while in the process of fixing it, they were besieged by hoodlums numbering about five. The hoodlums beat up the truck driver, robbed him of N5000, carried nine 25-liter gallons of diesel from the lorry. They equally assaulted the owner of the goods, inflicted matchet injury on his left leg, robbed him of his Android phone (value yet to be stated), N180,000 cash and at gun-point snatched the Lexus SUV and zoomed off with it and all the other items robbed.

‘Luck, however, ran out of the gang as the Lexus SUV eventually stalled along the way, hence they abandoned it, but carted away the diesel, etc.

‘In the early hours of 30/08/2022, the victim lodged the complaint at Ishielu Police Division and the operatives swung into action.

‘Armed with credible information and in conjunction with Ebubeagu Security operatives in the area, swooped on the hideout of the hoodlums, arrested four of them identified as follows: Onyebuchi Nwali 36 years, Ikemefuna Nwachukwu 28 years, Nwabani Kosisochukwu, 28 years, all of Ezza Umuhuali, in Ishielu LGA and Nweke Obinna, 30yrs, native of Onunwankwo Ezza Umuogharu Ishielu LGA.’

The exhibits recovered from the suspects, according to the statement, include: Lexus Jeep with Reg No JJ 149 KL; Five 25-liters gallon with liquid substance believed to be diesel, and one locally-fabricated double-barelled pistol.