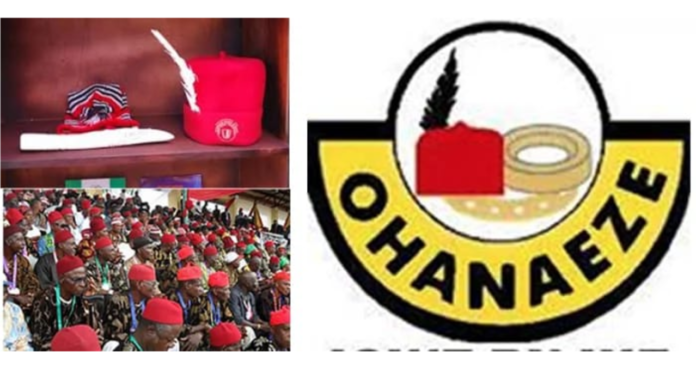 Ohanaeze Ndigbo which is the apex Igbo socio-cultural organisation, has blasted one of its members, Professor Joe Ukemenam over some of his claims that the detained supreme leader of the Indigenous People of Biafra (IPOB), Mazi Nnamdi Kanu’s house in London is worth over £10million.

Professor Ukemenam had actually quoted in an interview with the Sun Newspapers when he had said that Mazi Nnamdi Kanu had no traceable business while he also added that there is no evidence of tax returns or national insurance contributions on the part of the IPOB leader.

But the National President of Ohanaeze Ndigbo Youth Council Worldwide, Mazi Okwu Nnabuike, while reacting had noted that he wondered how Ukemenam became leader of Ohanaeze in the United Kingdom, noting that his statement was alien to the principles of Ohanaeze Ndigbo which borders on promotion of Igbo interest.

In a statement, the OYC President said, “It is not in doubt that Mazi Nnamdi Kanu has been residing in London several years before he took the centre stage for the actualization of Biafra.

“One now begins to wonder why someone who calls himself Igbo leader will come up years later to begin to question Nnamdi Kanu’s source of wealth, merely because he is championing Biafra.”

“This leaves us in serious doubt on how he rose to the position of Ohanaeze leader in the United Kingdom. If at all it is true, he should be removed immediately as he lacks the capacity to represent Ndigbo. He is at best an enemy of Ndigbo.

“He clearly exposed himself as an enemy of Ndigbo and a collaborator in the ordeal being faced by the IPOB leader. His claims that the UK government is helpless is also another false narrative taken too far.

“The United Nations has taken a clear stand on Nnamdi Kanu’s case and a million Ukemenam cannot change that,” Okwu declared.

He had also warned Ukemenam against making reckless statements in the future.