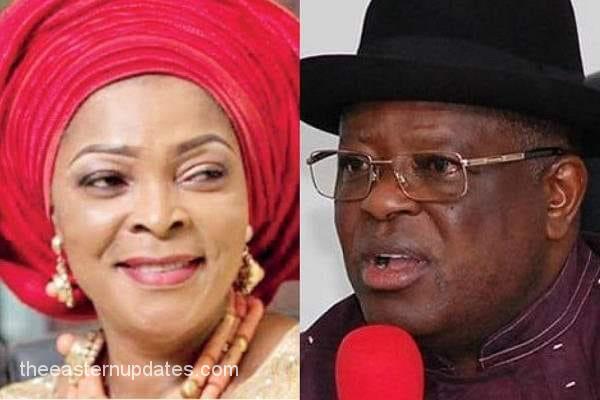 The recent suspension of Umahi’s female rival has come with a lot of backlash as it has been reported that not less than 278 women rights groups and Civil Society Organisations have on Sunday come out to massivey condemn the alleged threat to life and suspension of a female senatorial candidate under the All Progressives Congress, Ebonyi South senatorial zone, Ann Agomeze.

Agomeze, who has been identified as the major opponent of the Ebonyi State Governor, David Umahi, in an exclusive interview had also made note of the fact that her life had been under “threats and harassment” since the contest for the seat began.

The All Progressives Congress in the state had however announced her suspension.

But in a statement which had been signed on behalf of all the women groups by the Convener of Womenifesto, Abiola Akintoye-Afolabi on Sunday, the groups called on the leadership of the APC to look into the situation.

“We, the undersigned, of the Feminist Womanifesto Group, condemn in strong terms, the unjust expulsion, intimidation, oppression, threat to life, and victimisation of Ann Agomeze, who has decided to serve her constituency as the senatorial candidate of the APC, for Ebonyi South Zone.

“Every citizen of Nigeria has the right to elect and be elected into any of the elective positions, it is not the exclusive preserve of a selected few or a particular gender. Women and girls in Nigeria continue to face an unprecedented set of challenges in political participation. Despite the push by women groups, coalitions, and civil society organisations in Nigeria to remove systematic barriers that hold women back from equal participation in political leadership, the historic event that led to the expulsion of the APC’s senatorial candidate, Mrs. Ann-Agomeze evidences the rising pushback against the hard-won gains for women’s political rights.

“The ruling APC in the state on Monday, August 15, ordered the immediate arrest of the Ebonyi South senatorial candidate, Mrs. Ann-Agomeze over alleged anti-party and perjury against the party in the state, due to the unsubstantiated accusations by her senatorial rival, Governor David Umahi and his party supporters which indicates the widespread gender inequalities that persist and the current imbalance in political power.

“The expulsion of Ann-Agomeze by the APC leadership without a fair hearing is unconstitutional, it reinforces patriarchy and it portrays the deliberate exclusion of women from political participation, even when the case between both parties, Governor David Umahi, and Ann-Agomeze is at the Appeal Court. This highlights a high level of impunity by the Ebonyi South APC party Leadership, and a lack of will by the APC to respect the National Gender Policy 35% affirmative action, the INEC Gender Policy, and the APC party manifesto on Affirmative action.

“The purported suspension/expulsion has disparagingly defamed Mrs. Agomeze with the intent to blackmail her into backing out from the senatorial race, which is unacceptable, unethical, and unjust. There have been incessant threats to her life which is a criminal act. The Nigerian Constitution emphasises inclusiveness and autonomy as a way of ensuring that the benefits of national citizenship are shared equally across Nigeria’s complex spectrum of diversity. The governor has been a chairman of Peoples Democratic Party, he has been a deputy governor, and now a governor. He aspired to be the President of this country, Nigeria. While Agomeze aspired to be the Senator of Ebonyi South Senatorial Zone.’

These are two different aspirations and by the provisions of our 2022 Electoral Law, one cannot sign two nomination forms in the same electoral year. However, when the governor failed in his bid for the President, he resorted to blackmail, intimidation, and victimisation despite the Federal High Court judgment sitting in Abakaliki, recognising Ann Agomeze as the candidate.’

“We, therefore, call on the political leadership of the APC in Ebonyi State including the National Chairman and other executive members at all levels of the APC, and all other relevant actors to take immediate measures – beyond reinstating her from the suspension/expulsion, to publicly apologise the media publications, ensure that her candidacy is secured and end all forms of threat to her life, intimidation, defamation and violence against Ann-Agomeze”.

The groups had also made it clear that they were calling for a reversal of Agomeze’s suspension.