NPFL: Onuh Hinted As Replacement For Amapakabo In Abia Warriors 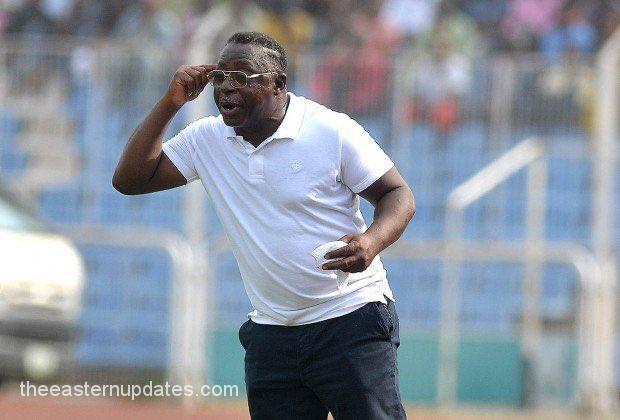 In the Nigerian sports sector, the Head Coach of relegated Heartland Football Club of Imo State, Erasmus Onuh, has been heavily linked to a move which would be taken to Oriental rivals, Abia Warriors, as successor to their coach, Imama Amapakabo.

Amapakabo had reportedly parted company with Abia Warriors after seeing off a two-season coaching role at the Umuahia side.

Onuh, who had an unsuccessful rescue mission at Heartland, is pulling all the positive strings as the former three-time NPFL Champions continue to progress in the Aiteo Federation Cup, with a shock 4-3 (penalties) win over eastern rivals, Rangers International in the Aiteo Cup Round of 32 fixtures.

“Onuh is just one of the several coaches whose names are being trumped up here as a possible replacement for Amapakabo,” a credible Abia Warriors source exclusively told Completesports.com.

“Agreed, his name is being mentioned, but then, it’s still early in the transfer window and the club, (Abia Warriors) are yet to sit and discuss the plethora of coaches whose resumes are already with us.

“Yes, Onuh’s name is being trumpeted for the job, but don’t forget that he still has a subsisting contract with Heartland and that they are still in the Federation Cup pushing for a silverware.

“So, as far as we know – as far as I know, we’re still searching for a new coach and no one, not even Onuh could be said to have been more favoured,” the Abia Warriors source submitted.

Heartland are in the last 16 of the Aiteo Cup, aiming to lay their hands on silverware this term as consolation, following their relegation from the NPFL.

And should this title triumph ambition come true, it would be the Naze Millionaires’ fourth success in the domestic cup, following wins in 1988, 2011 and 2012.