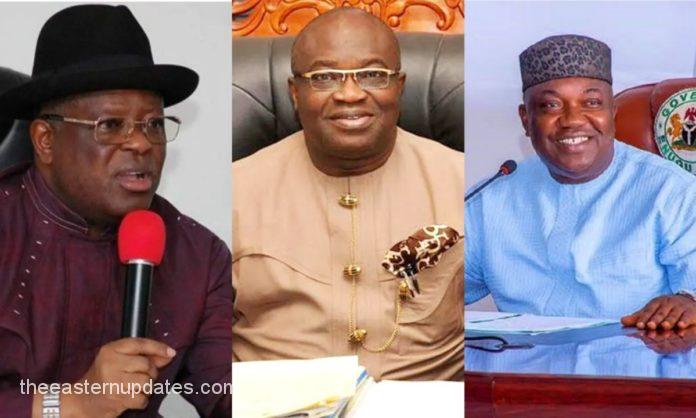 While lauding their foray into the senatorial race of their respective states, the Igbo socio-cultural organisation, Ohanaeze Ndigbo have reiterated that the emergence of three serving governors in the South-East as senatorial candidates would be turning out for the good of the zone.

Governor Ifeanyi Ugwuanyi and Okezie Ikpeazu of Enugu and Abia, respectively had emerged senatorial candidates under the platform of the Peoples Democratic Party, PDP.

Read Also: Osinbajo Should Be Impeached With Buhari – Ohanaeze Vents

Similarly, it had also been reported that the Ebonyi State Governor, Dave Umahi who has been facing legal entanglement, finally emerged as All Progressives Congress, APC, senatorial candidate for his zone.

In a statement issued by the Secretary-General of Ohanaeze, Mazi Okechukwu Isiguzoro, he said the 2023 election would be a reward-time.

“Ohanaeze Ndigbo worldwide applauds the emergence of some South-East Governors as their party’s flagbearers for their senatorial districts in the 2023 elections.

“This is the time Ndigbo will reward them for their excellent accomplishments in their various States.

“Governor Ikpeazu’s brilliance in economic policies and security initiatives makes Abia the safest State in the South-East and the economic hub Center for Ndigbo. He has an Igbo mandate to represent Abia South Senatorial district in the Senate.

“Umahi’s emergence as the APC flagbearer for Ebonyi South senatorial district after the rerun primaries on 31st July, 2022, completes the circle of achievers who are the best to represent the southeast in 10th National Assembly,” the Ohanaeze scribe said.

He warned that this was the time for non-performing lawmakers “to voluntarily retire from their senatorial seats in the South-East or be disgraced in the 2023 polls.”

“Most of them have been sleeping in the Senate and most of them never judiciously used their constituency funds for the good of the people,” he stated.

Facebook
Twitter
WhatsApp
Email
Telegram
Previous articleEkweremadu: How Nwamini Had Told Lies About Being An ‘Orphan’
Next articlePandemonium As Unknown Gunmen Kill 7 In Imo