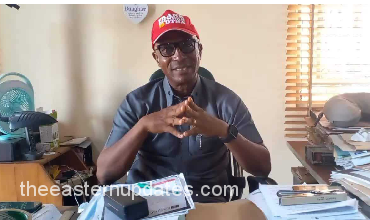 Frank Esenwah who is a well known chieftain of the Peoples Democratic Party, PDP, in Delta State has given an open warning about unknown gunmen who have been besieging Delta State of recent while asking them to steer clear of the state.

Esenwah, who is the PDP candidate for the Oshimili North Constituency in the 2023 elections, had also reiterated that the state is not a territory of the Indigenous People of Biafra, IPOB, hence unknown gunmen should stay away.

He spoke against the backdrop of criminal attacks in some communities of the state.

Esenwah said: “We were informed that some criminal gang tried to terrorize this community but we thank God that the police were able to live up to their billing and one of them was killed while two escaped with bullet wounds.

“Going forward as leaders from this community, we will see what we can do to support the law enforcement agencies to ensure that this kind of attack doesn’t happen again.

“We need to sound a note of warning to them that this is not an IPOB territory and they should keep off this community and the entire state.”

In another report, CP Ari Muhammed Ali who is the Delta State Commissioner of Police has on Monday announced that a patrol team which had been attached to the Illah Division has neutralised a member of the proscribed Indigenous People of Biafra, IPOB, during an exchange of gunfire as two others escaped with gunshot injuries.

CP Ali said the patrol team was on a stop-and-search duty at Ogbada quarters along Illah–Akwukwu-Igbo road, when three armed men suspected to be members of the proscribed IPOB attacked the team.