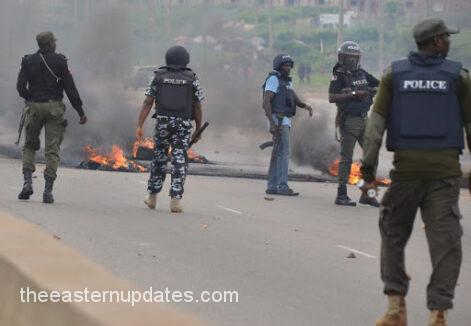 CP Ari Muhammed Ali who is the Delta State Commissioner of Police has on Monday announced that a patrol team which had been attached to the Illah Division has neutralised a member of the proscribed Indigenous People of Biafra, IPOB, during an exchange of gunfire as two others escaped with gunshot injuries.

CP Ali said the patrol team was on a stop-and-search duty at Ogbada quarters along Illah–Akwukwu-Igbo road, when three armed men suspected to be members of the proscribed IPOB attacked the team.

According to him, “The team engaged them in a fierce gun duel during which one of the hoodlums was neutralized while the other members of the gang escaped with gunshot injuries.

“Manhunt for the fleeing members of the gang is ongoing.”

In another report, the Enugu State Police Command has announced that it has found the car of missing Nollywood actress, Cynthia Okereke.

The Public Relations Officer in Enugu, DSP Daniel Ndukweconfirmed the development on Saturday.

Ndukwe said, “the current report at our disposal dwells on a case of an abandoned and recovered vehicle, as well as a missing person.”

He said that the vehicle was abandoned and recovered at Four-Corners on Enugu-Port-Harcourt Expressway, precisely within Ozalla community in Nkanu West Local Government Area of Enugu State axis of the road.

“On July 29, at about 7:30 a.m., we received information that a red-colored Toyota RAV4 Jeep with registration number AGL 199 CY was noticed to have been parked in an abandoned way at Four-Corners on Enugu-Port-Harcourt Expressway.

“Hence, the location was visited and the vehicle recovered.

“Coincidentally, at about 11:30 a.m., of the same date, a report was further received stating that the vehicle belongs to one Cynthia Okereke (f), a Nollywood Actress, who was last seen on July 26,” he said.

The police spokesman said that the report at the command’s disposal revealed that only one person was reported to be missing.