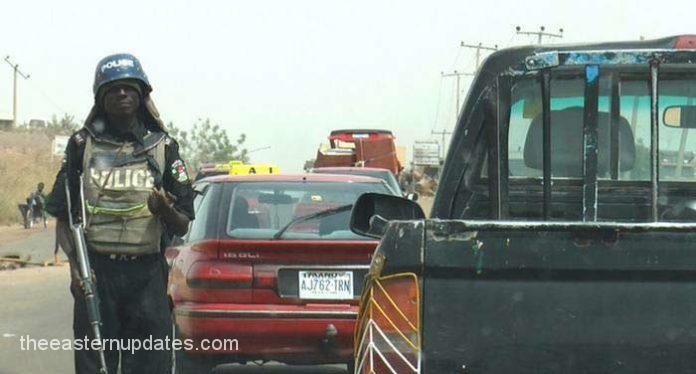 The Police Command in Enugu State has finally opened up on the details of the checkpoint attack and they have also revealed that no life was lost at the incident which had involved a man and his girlfriend at a police checkpoint in the state capital.

This is contained in a statement issued by the Command’s Public Relations Officer, DSP Daniel Ndukwe, on Sunday in Enugu titled: “Police Setting Record Straight on Misleading Alleged Shooting of Man and Girlfriend Dead in Enugu”.

Ndukwe said that the incident took place on July 21 at about 2p.m at the EFCC Roundabout, Independence Layout, Enugu.

“The attention of the Command has been drawn to a viral video alleging that the Police shot a young man and his girlfriend dead, at Monkey Roundabout, close to EFCC Office, Enugu’.

“The Command, hereby, wishes to set the record straight as follows:

“That on July 21 a team of police operatives serving in 3 Police Mobile Force (PMF) Enugu, while on routine stop-and-search duty at EFCC Roundabout, Independence Layout flagged down the driver of a Lexus Saloon Car.

“The driver, rather than stop, recklessly zoomed off, knocking down one of the operatives and pulled him along to a distance of about four poles, before he was forced to stop by the other members of the team, who immediately went after him.

“In the bid to restrain the driver from further escape, one of the operatives fired a knee level shot, which got him in the thigh,” he said.

Ndukwe said that the Inspector, Aneka Ndayi, who sustained severe bodily injuries; and the said driver, Christian Ogwuike, were both moved to the hospital and responding to treatment.

The police spokesman said that the commissioner had urged residents, particularly motorists, to always cooperate with police officers performing road duties, to avoid such occurrences.