Details Of Peter Obi’s Visit To Gov Ikpeazu In Abia 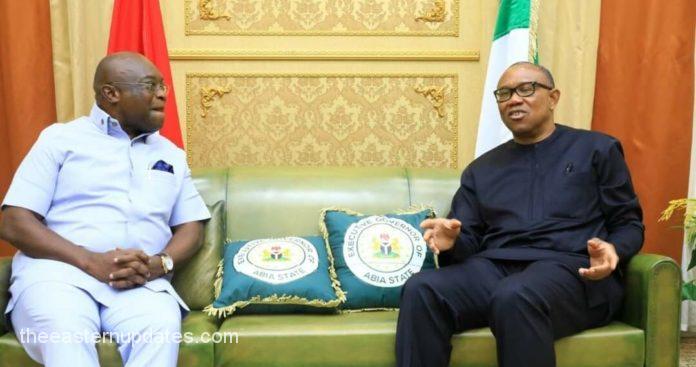 Peter Obi had reportedly made the trip to Gov Ikpeazu’s country home at Umuobiakwa, at the Obingwa local government area.

The governor’s spokesman, Onyebuchi Ememanka had also issued a statement about the meeting.

Obi informed Ikpeazu that he was in Abia to attend an event at the Mater Dei Catholic Cathedral Umuahia.

The visit was said to be “in line with official courtesies and protocols”.

“They also had a private breakfast session”, Ememaka added.

Ikpeazu presented Obi with the first ever Abia State Long Term Development Plan and the Abia State Industrial Policy. The documents were presented to him on Friday by ECOWAS Representative at the United Nations Industrial Development Organization (UNIDO).

In another report, the Ebonyi State Governor, David Umahi has noted that he was neither against the aspiration of Mr Peter Obi State and who is the former Governor of Anambra the presidential candidate of Labour Party, nor the quest for the Nigeria’s president of Igbo extraction in 2023.

Gov Umahi had made these clarifications on Friday after a lot of backlash he had gotten while reacting to a post making the rounds on social media quoting him as saying that he was against Mr Oeter Obi’s presidential aspiration. The post also quoted Umahi as saying that he does no longer believe in the struggle for the Nigeria’s president of Igbo extraction.

But the Governor through a press statement signed by the State Commissioner for Information, Barrister Uchenna Orji, said the post in circulation was authored by political jobbers.

The statement reads: “The attention of Ebonyi State government has been drawn to a social media post being recently in circulation and purported to have been authored by the hard working Governor of Ebonyi State by miserable and frustrated political jobbers.

“For the records, the Governor of Ebonyi State is not against His Excellency, Peter Obi for Presidency but infact deeply appreciates his courage in his campaign.