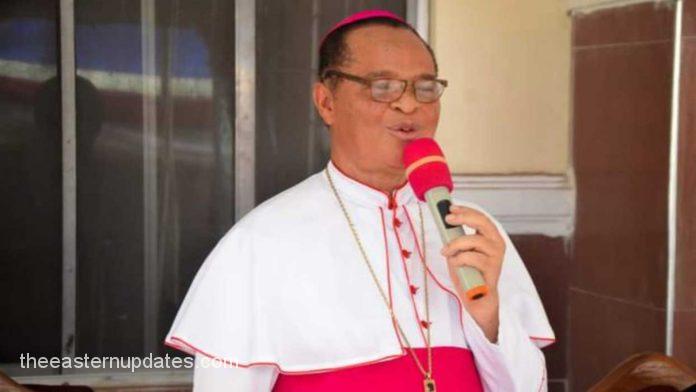 It has been five days since the gruesome murder of some youths in Awomama, Imo State and the Metropolitan Archbishop of Owerri, Lucius Iwejuru Ugorii has come out to openly lament to the Imo State Government not to allow the sad incident to be swept under the carpet.

Bishop Ugorii who had described the development as barbaric, offensive, and totally unacceptable made this known in a statement he signed and made available to journalists on Friday in Owerri, Imo State capital.

He said, “As moral agents, no one should clearly aim at taking away human life no matter the circumstances. The Awomama massacre should not be swept under the carpet. That slaughter, no matter the reasons, is barbaric, offensive, and totally unacceptable.”

The statement reads, “The gruesome murder of some youths at Awomama in Imo State a few days ago has caused public outrage. Since this incident, there have been various narratives about who carried out this dastardly and abominable act, and why.

“While some members of the public blame government and her security outfit Ebubeagu for murdering unarmed and defenceless young men coming back from a wedding, the DSS Director, on the other hand, confirmed that his men carried out an operation in a camp, where those he described as ‘bandits’ were killed, as a means of ensuring public security.

“Our aim is not to delve into this web of contradictory narratives, but to unequivocally condemn this mindless blood-letting, and similar senseless killings, which have bedevilled Igbo society, especially Imo State in recent times.

“Our soil has been defiled by the abominable shedding of innocent blood. We are becoming a society that has no regard for the sanctity of human life and is ready to waste human life at the least provocation. How many of our youths have been cut down in their prime?

“Let us reiterate here that we condemn all killings from all quarters, whether private or public, whether by overzealous, trigger-happy security men or by
paramilitary or cults groups.”

The cleric said no society can flourish or survive when her future leaders and productive sector of the population are mercilessly mowed down for mere suspicion.

He further explained that Law and Order are not synonymous with jungle justice. While no one should condone any form of banditry or lawlessness from any quarters, jungle justice and extra-judicial killings cannot be a solution to the challenges of law and order.