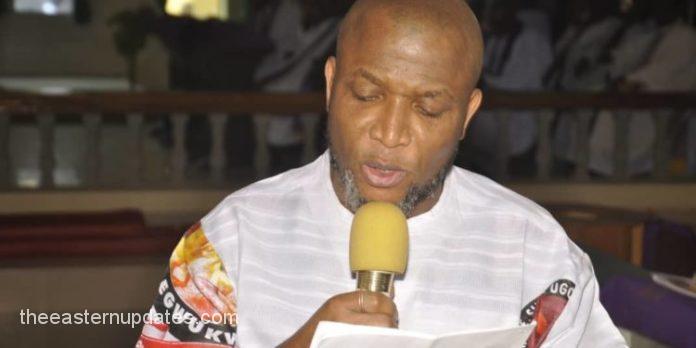 While reacting to the painful death of a couple of youths who were gunned down by the commissioned Southeastern security network, the Ebubeagu, the younger brother to Nnamdi Kanu, the embattled leader of the Indigenous People of Biafra, IPOB, Kingsley Kanunta Kanu has blasted Governor Hope Uzodinma for the killing of seven youths in Oru East Local Government Area of Imo State by operatives of Ebubeagu security outfit.

The Eastern Update had reported that some of the operatives of Ebubeagu security outfit had killed the seven youths while they had been returning from a traditional wedding in Awo-omama.

However, Kanu condemned the killing of the youths.

In a tweet, Kanu accused Governors Hope Uzodinma of Imo State and Dave Umahi of Ebonyi States of “competing in killing Igbo youths.”

“The massacre of 14 innocent #Biafran youths in Awo Omamma by Gov Uzodinma’s Ebubeagu militia in Imo state today is unacceptable and must be condemned.

The spokesperson of the State Police Command, Micheal Abattam, confirmed the incident.

Abattam disclosed that Mohammed Ahmed Barde, the Commissioner of Police, ordered investigations into the killings.

The President General of Otulu Community, in the area, Nnamdi Agbor, who opened up while speaking to reporters on Monday revealed that about seven young men were shot and killed Sunday night by the Ebubeagu operatives.

His words: ‘Youths from our community in Otulu had Sunday accompanied one of our brothers to Awomamma for his traditional wedding rites, at the end of the event, many of the youths who came on motorcycles offered to carry their brothers and they all rode back in a convoy of motorcycles.

‘On their way home, around the Ishieke area of Awomamma, without any conversation or confrontation, the Ebubeagu operatives opened fire on the convoy of motorcycles killing seven persons on the spot. While they abducted some of the wedding guests some others escaped into the bush in a desperate flight for safety.’

‘The Ebubeagu operatives took deliberate steps to make certain that the young men were dead. Those who still moved where finished off with a volley of bullets. Miraculously, one of our sons was mistaken for dead, after the operatives moved to their vehicle, he fled into the nearby bush and disappeared into the night. At about 1am, some of them that fled into the Bush called me and I called some of our brave youths to go and rescue them from the forest that same night.

“By Monday morning, we mobilize a search party, accompanied by an Army patrol team and we returned to the scene of attack and received seven dead bodies of our sons with five others still missing with several others nursing bullet wounds. As I speak to you, we are yet to be told the crime committed by our sons for which they were slaughtered like animals”