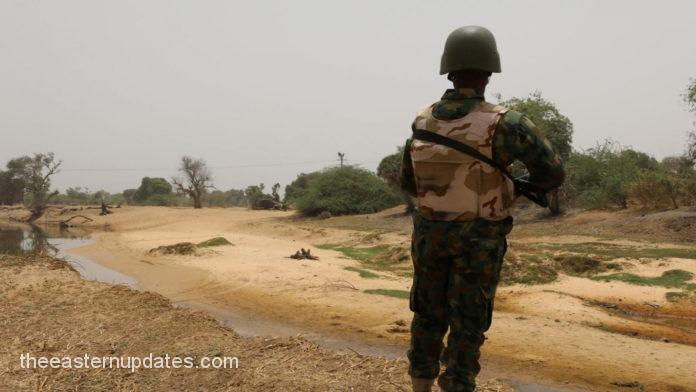 The International Society for Civil Liberties and Rule of Law (Intersociety) which is a civil rights group, has openly made some allegations that some security operatives working under the directive of the Nigerian Government have killed no fewer than 1,360 persons and rendered 51,000 people homeless in the South-Eastern region of Nigeria in 20 months.

The group had made this analysis in a press release in Awka, Anambra State on Monday by its board of trustees chairman, Mr Emeka Umeagbalasi.

The group said about 150 communities in Igbo land have been raided within the period, and about 1,400 homes destroyed.

The group’s statement read partly, “Soldiers of the Nigerian Military and others including various police crack squads and their allied Ebubeagu government militias deployed in Igbo parts of Eastern Nigeria between October 2020 and June 2022 have raided 150 communities, burnt or destroyed 1,450 defenceless civilians’ homes.

“They have forced 51,000 out of their ancestral homes, killed 1,360, burnt or destroyed or looted civilian properties worth N57bn and caused N600b trade and investment losses following the siege and atrocities.”

The group said it launched an international documentary on Sunday, during a zoom meeting and has pictorial and video evidence of most of the killings and destructions.

“The thorough investigation and compilation of verified videos and photos into the burnings and related atrocities had lasted for six months (January to June 2022) following our special report of 19th January 2022.

“The Report had factually accused the soldiers of the Nigerian Military of indiscriminate killing of defenceless civilians and burning and destruction of their properties; brazenly and hatefully perpetrated outside the law and with impunity.

“The Nigerian Army on 20th January 2022 issued a rejoinder, denying responsibility and refusing to investigate and fish out the perpetrators responsible and punish them severely to deter repeat perpetration and occurrences.

“The gathered photos and videos used had included those from other news reports and commentaries derived from Nigerian Military’s field operations in Eastern Nigeria and other parts of the country since 2015.”