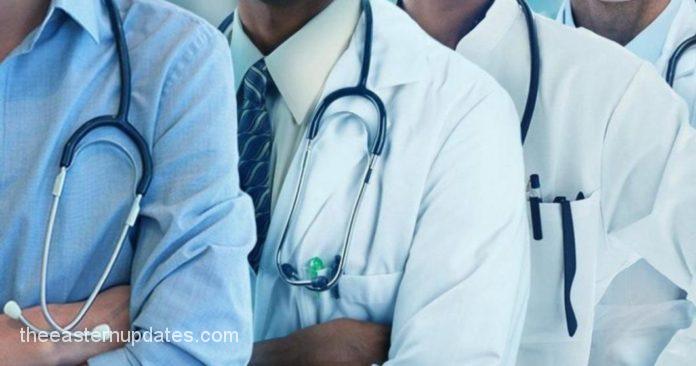 All practicing medical doctors in both public and private practice in Abia State, on Tuesday, commenced an industrial strike action in solidarity with their colleagues owed salary arrears by the State Government.

The Chairman of the state chapter of Nigerian Medical Association (NMA), Dr. Chimezie Okwuonu, told reporters on Tuesday, that the decision to embark on the strike action was taken during the NMA yearly delegate meeting and general conference held in Port-Harcourt, Rivers State, from May 15 to 22, 2022.

He said that the Association had observed that medical doctors in Abia State University Teaching Hospital (ABSUTH), Aba, are owed up to 25 months salaries, while those in the State Hospital Management Board (HMB) are owed 11 months arrears.

He disclosed that efforts made by the NMA at national and state chapters to resolve the matter did not yield positive result; hence, the directive to down-tool every Tuesday until further directive.

The state medical doctors’ leader, therefore, called on the state government to speedily settle the salary arrears of doctors in Abia, particularly in ABSUTH and HMB.

Meanwhile, the Anambra State branch of the Nigerian Medical Association (NMA) has openly decried the rising cases of kidnapping and other crimes which has been targetted at its members in the state.

The association also issued a statement last Thursday in Awka, calling on Governor Charles Soludo and security agencies in Anambra to take more proactive measures to check kidnapping in the state. The statement was signed by Jane Ezeonu, the acting chairman and Dubem Awachie, the acting secretary of NMA in Anambra.