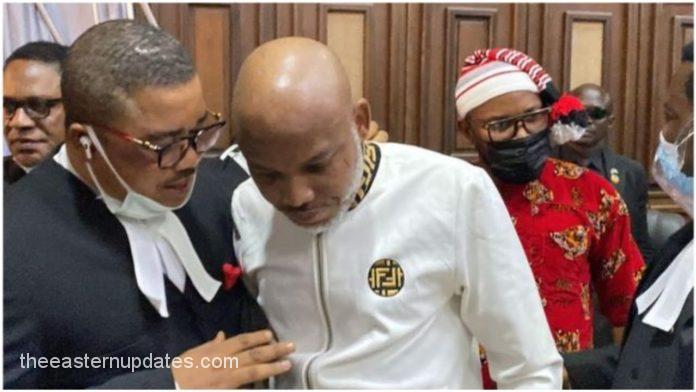 While reacting to the dastardly attack on the Kuje Medium Correctional Centre, Abuja by some yet to be identified gunmen, the Indigenous People of Biafra, IPOB, have openly alleged a plot by some of the terrorists to eliminate its leader, Nnamdi Kanu, in the Department of State Services, DSS, facility when the time is due.

While reiterating this information, the IPOB has suggested that Mazi Nnamdi Kanu should be transferred to a prison facility in the Southeastern part of the country to further ensure his safety.

Emma Powerful who is the spokesman of IPOB, said Kanu should be transferred to a Southeast prison for his safety.

A statement by Powerful reads partly: “We want everybody to understand that the reality of the Fulani agenda to Fulanise Nigeria is around the corner. All Fulani’s calculated plan to attack our leader, Mazi Nnamdi Kanu, in DSS custody is being done with full collaboration with the DSS.

“Our intelligence unit uncovered the Fulani evil plan against our leader. Therefore, we demand that our leader Kanu be immediately transferred to a prison in the Eastern region for his safety because if anything untoward happens to him Nigeria will see and feel total and consuming madness even after the Biafran Nation’s freedom is fully achieved; they will never have peace.”

“What happened in Katsina with reference to the so-called attack on Buhari is an arranged attack by Buhari and Fulani to raise more money to procure and acquire arms which they will use to prosecute their planned jihad to conquer every part of Nigeria but Biafraland will be their waterloo because we are Umuchineke.

“A very pertinent question to ask is, how can bandits and terrorists be rampaging the North, even supposedly attacking the president’s convoy and breaking into prison yards to release their colleagues while Buhari and Fulani governments deployed and continue to deploy battalion of soldiers to occupy many peaceful communities in Biafraland? The international community must watch and pay attention to the Nigeria Government and its Fulani Islamisation and fulanization agenda,” Powerful added.