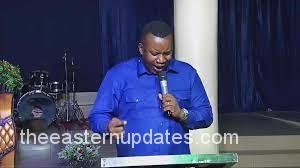 Bishop Paul Nwachukwu who is the Presiding Bishop and also the General Superintendent of the Grace of God Mission International has come out to openly deny all the rumours of attacks on his church by some terrorist figures.

There had been rumours last Sunday that four men who had been suspected to be Fulani terrorists had invaded a branch of the church in Onitsha, Anambra State with plans to attack worshippers when they were detected.

One of the men was alleged to have been apprehended and burnt alive, while three had fled.

But the state police command while reacting to the story said the men were not Fulani terrorists, but petty thieves who attacked a victim in the neighbourhood, but one was apprehended and burnt alive.

The Presiding Bishop of the church in a press release he signed had revealed that the rumours of the attack were untrue.

The Bishop described the news as fake, false and malicious, insisting that at no time was his church invaded by any unknown persons last Sunday.

Part of Nwachukwu’s press release read: “Our attention has been drawn to a Facebook post by one Chinasa Nworu which alleged that four Fulani terrorists sneaked into one of the branches of the church at Awada in an attempt to blow up the church.

“According to the post, one of the terrorists was captured and set ablaze while the other three escaped.

“We wish to unequivocally state that our church in Awada was not attacked, and nobody or group of persons attempted to detonate a bomb in the church.

“The post is false misleading and mischievous. We urge the general public to disregard the news as it is a complete falsehood.”

The cleric enjoined members of the church to feel free to worship in any branch of the church, while reiterating that the Almighty God whom they serve will not allow harm to come their way.