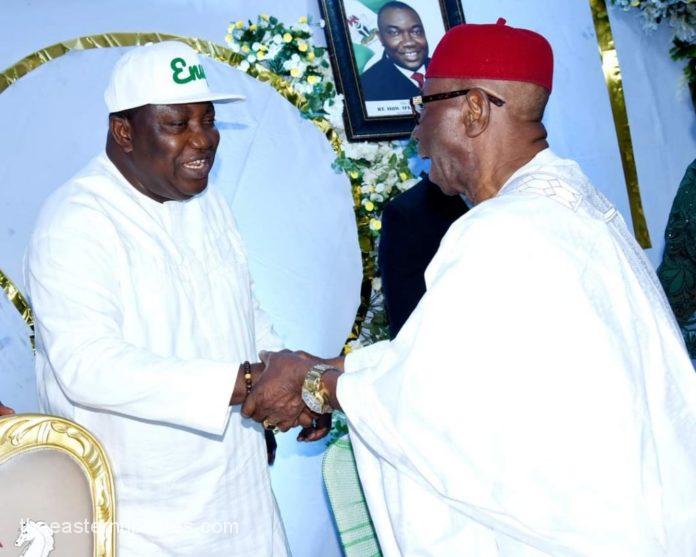 While lauding some of his stellar achievements and his good works, the National Leadership of the Nigeria Union of Pensioners, (NUP), has openly expressed their full delight and happiness with Governor Ifeanyi Ugwuanyi of Enugu State for his full commitment to the welfare of the pensioners of the state in spite of the state’s lean resources and the country’s economic challenges.

Speaking when Gov. Ugwuanyi hosted him at the Government House, Enugu, following his emergence as the Comrade Godwin Ikechukwu Abumisi who is the new National President of NUP, an indigene of Ezeagu Local Government Area of Enugu State and the first Igbo man to head the national leadership of NUP, described Gov. Ugwuanyi as “a pensioner and labour-friendly governor”.

According to him, “We have also listed the names of governors who are not paying pension and gratuity. I am so happy to inform you that our dear Governor (Ugwuanyi) and the government of Enugu State are not on that list”.

Comrade Abumisi, therefore, commended Gov. Ugwuanyi for his steadfastness, saying: “I want to say that I am very happy to associate with you. Having won the Presidency (NUP), we said it will be beautiful for us to come to Enugu and tell His Excellency that we have done so.

“We are here because this is the first time in our history, in the national history, in the history of the NUP, that it is our fortune to occupy the position of the National President of the Nigeria Union of Pensioners.

“The beauty of it all is that I am from Enugu State, from a little town known as Obeleagu Umana in Ezeagu LGA”.

On their part, the leaders of pensioners from Enugu State/South East Zone expressed profound gratitude to Gov. Ugwuanyi “for the compassionate love, respect and honour that you have meted to our extended pensioners in Enugu State”.

Speaking on their behalf, Comrade Dr. G.B Ugochukwu equally thanked the governor “for your labour/pensioner friendliness, regular payment of workers’ salaries, pension, security and infrastructural development in the state”, saying: “All these are possible because Enugu State is in the hands of God”.