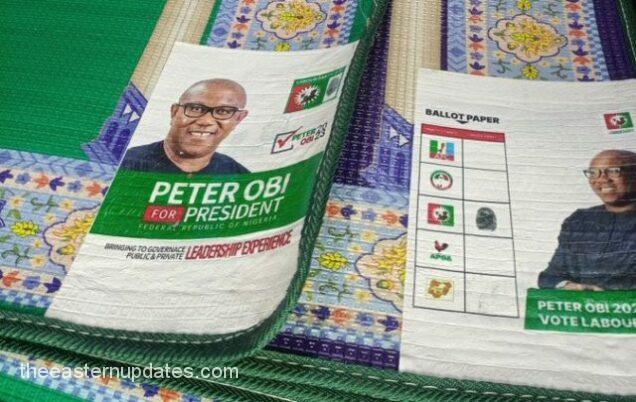 Dr. Peter Obi who is the Presidential candidate of the Labour Party, (LP), has put out a statement to fully distance himself from the motive behind the insertion of his picture on Muslim prayer mat.

Some of his overzealous supporters had inserted his picture on Muslim prayer mat in support of his ambition.

But Peter Obi in a tweet had completely denounced the move, while reporting that he had deep respect for the Muslim faith and for all religion.

He said the action of his supporters in doing that was misguided even with the best of intentions.

The LP presidential candidate said the act did not emanate from his campaign team as he would never mock any faith, ethnicity or gender.

He tweeted: “The inclusion of my picture on the praying mat by a support group was misguided, even with the best of intentions.

“It didn’t emanate from my campaign team. I have deep respect for the Muslim faith and indeed, for every other religion.

“We will never mock any faith, ethnicity or gender. We are one Nigeria,” Obi sad.

Obi is seeking to become the president of Nigeria in 2023 and his movement has soared, especially on social media.

If he succeeds, he will become the first Igbo man to become president of Nigeria.

Peter Obi has also stated that Nigeria is actually suffering from bad leadership, and there might be a cascade of crisis in the country soon.

Peter Obi had stated this on Tuesday during a visit to the leadership of the Nigerian Labour Congress (NLC) and the Trade Union Congress (TUC) in Abuja. The former Anambra governor called for a change from the sharing formula to the production formula, adding that Nigeria is not a producing country.

“Nigeria is not a producing country. The cumulative effect of what we’re suffering today is bad leadership,” Obi said.

“It’s a leadership that concentrates on sharing. We have to move from sharing formula to production formula.

“All our young people in their productive age aren’t doing anything, so we’re going to have a crisis.”