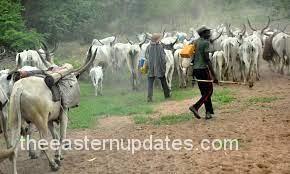 Tense conditions have developed in the Akpaa Mbato community in the Obingwa council area of Abia State following the invasion of the area by Fulani herders.

According to reports, the herdsmen who are claimed to have entered the community with more than 500 cows refused to leave their animals in the bush and on farmlands.

The president of Akpaa Mbato Youth Council, Steve Ugboaja who disclosed this to reporters said the rampaging cows have destroyed many farm lands and crops.
Read Also: Singer Osinachi Finally Laid To Rest In Abia State Hometown
He lamented that their people can no longer go to their farms for fear of attack by the herdsmen, stressing that hunger looms in the community if nothing was done to address the situation.
‘The Fulani herdsmen have taken over our bushes and farm lands. They have been here for over one week, destroying our farm lands and crops. There is tension in Akpaa Mbato community as the herdsmen have defied appeals to leave the community.
‘My people are now afraid to go to their farms for fear of attacks. As at today, hunger looms in Alpaca Mbato as all our crops have been destroyed’.
He said he has reported the development to security agencies, adding that he was hopeful they will act in time in order not to allow the situation to degenerate loss of lives.