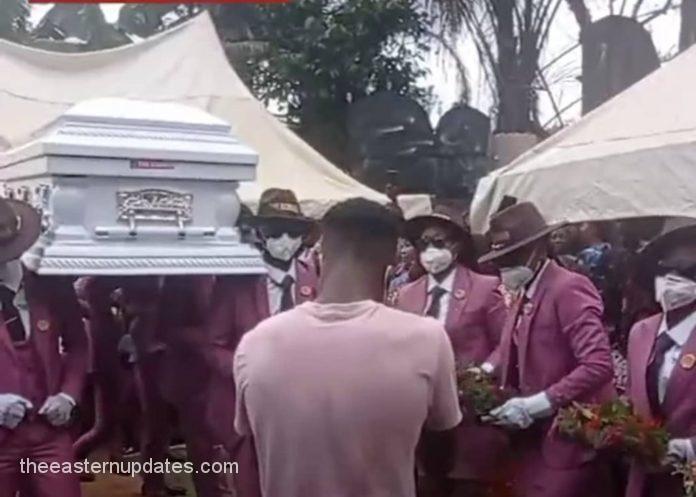 Some parts of Abia State were in mourning today as the remains of the late Ekwueme singer, Osinachi Nwachukwu were laid to rest today in her hometown in Abia State.

Mrs. Osinachi’s body was buried in her hometown, Isochi Umunneochi in Abia State.

The Ekwueme singer had given up the ghost on April 8, 2022, in Abuja after a controversial case of domestic violence.

Read Also: ‘Osinachi Nwachukwu’s Husband Made Life Intolerable For Her’

Osinachi had been alleged to have been a victim of domestic violence prior to her death and her death was linked to her husband, Peter Nwachukwu, for which he is standing trial before a Federal Capital Territory High Court.

Nwachukwu had denied subjecting the late singer to domestic violence.

He claimed she died of lung cancer. Despite his claims, the court had remanded him in Kuje Correctional Facility in Abuja.

Madam Madu, the mother of late gospel singer Osinachi Nwachukwu had described in pain how her late daughter’s husband, Peter Nwachukwu, made life intolerable for the late artiste.

According to Madam Madu, Nwachukwu swore that she would leave their marriage only if she died.

Osinachi’s mother, in a long video interview with BBC Igbo, detailed the extent of Peter Nwachukwu’s cruelty of her daughter and family.

According to her, the situation became so severe that she was forced to arrange for her daughter to abandon the marriage, but the gospel singer eventually returned to her husband after 15 months apart.

Despite the fact that her husband was unemployed and relied heavily on her daughter’s riches, she claimed he battered and verbally assaulted her.