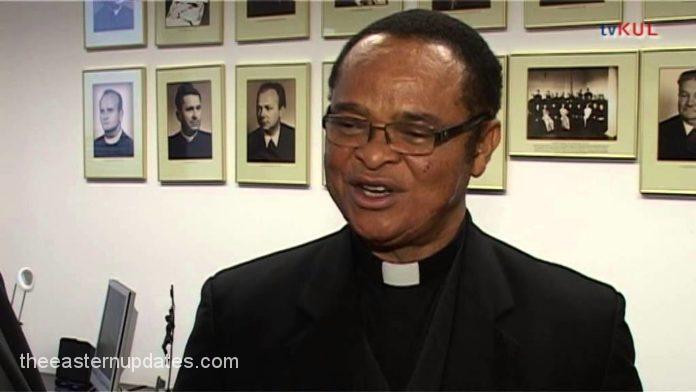 While appreciating his new position, the Most Rev. Lucius Ugorji who is the new Archbishop of the Owerri Catholic Ecclesiastical Province has appealed to those behind the killings in Imo State to sheathe their sword and give peace a chance.

Rev. Ugorji had made the appeal during his inauguration as the second metropolitan archbishop of the province, which was held at the Maria Assumpta Cathedral, Owerri, Thursday.

The prelate had noted that giving peace a chance is the only way development can be achieved. He also made it clear that peace comes when people are free from oppression, unemployment, exploitation and injustice, while adding that the church will continue to partner the State government in making the society better.

The New Archbishop had also described that the archbishop emeritus of the province, Most Rev. Anthony Obinna as an erudite, zealous and consummate missionary who has made great, strindent sacrifices for the growth of the province and the church as a whole.

The archbishop submitted that Obinna left a shoe big enough for anyone to fit into, but maintained that he was coming to the headship of the province with his own ‘customized shoe’.

He pledged unalloyed loyalty to the church, while calling for support and prayers from the clergy and the laity.

The Governor of Imo State, Senator Hope Uzodimma said Obinna had a remarkable and eventful reign as the archbishop of the province, while embarking on aggressive evangelism.

Uzodimma stated that much is expected of the new archbishop, Ugorji, especially at a time the nation is at crossroads and battling with insecurity.

The governor, however expressed confidence in Ugorji’s educational exposure and versed experience, adding that he was most qualified for the job.

Uzodimma urged the new archbishop to be the voice of the voiceless and to always stand for truth and justice.

In a homily, the Papal Nuncio to Nigeria, Antonio Filipazzi, urged the Catholic clergy to always proclaim the undiluted gospel and stand by the doctrine of the church.

Filipazzi, who represented the Pope, condemned what he described as social media attack on Bishop Callistus Onaga of the Enugu Diocese over the closure of the Adoration Ministries of Enugu operated by Rev. Fr. Ejike Mbaka.

The nuncio urged the faithful to be conscious of their relationship with their bishop and respect the laws of the church.