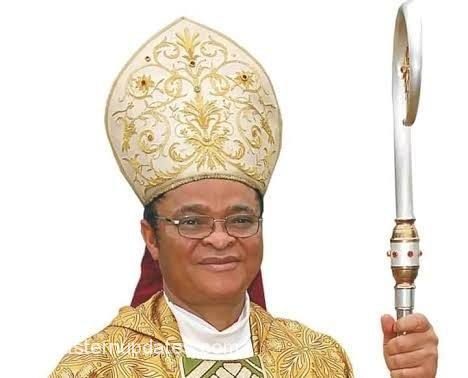 The newly installed Archbishop of Owerri Catholic Archdiocese, Most Rev. Lucius Ugorji, has been elected the new President of the Catholic Bishops’ Conference of Nigeria (CBCN).

The Eastern Updates reports that the new President of CBCN is expected to take over from Most Rev. Augustine Obiora Akubueze, whose four year tenure has ended.

Holy Father, Pope Francis, through the Apostolic Nuncio, Antonio Filipazzi, on Sunday, appointed Lucius Ugorji, as the Archbishop of Owerri Catholic Archdiocese, to replace Archbishop John Valentine Obinna, who retired at the age of 75.

CBCN, in a statement indicated that the election was part of the first plenary meeting of the CBCN going on in Abuja.

It added that in addition to the principal officers, other Bishops were also elected to oversee various departments and units of the Catholic Secretariat.

The Eastern Updates had earlier in the week reported that His Holiness, Pope Francis, had announced the appointment of the former Catholic Bishop of Umuahia and Apostolic Administrator of Ahiara Diocese, Most Rev. Fr. (Dr.) Lucius Ugorji, to replace the outgoing Catholic Bishop of Owerri, Anthony l Obinna who has now gone on retirement after attaining the age of 75.

Archbishop Antonio Filipazzi, Apostolic Nuncio (Representative of the Pope in Nigeria) made this announcement during the ongoing First Plenary meeting of the Catholic Bishops Conference of Nigeria in Abuja over the weekend.

He said Holy Father, Pope Francis, has accepted the voluntary retirement of His Grace Most Rev. Dr Anthony Obinna as the Archbishop of Owerri Catholic Archdiocese.