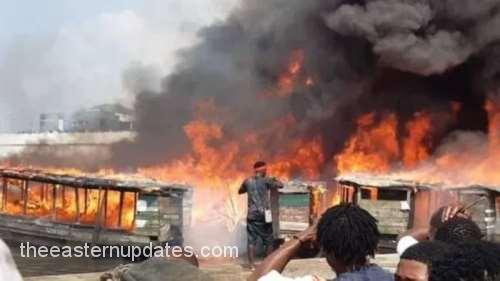 There was pandemonium in some parts of Imo State as some gunmen on Monday, laid siege on the popular Izombe Market in Oguta Local Government Area of Imo State where they attacked innocent citizens with bombs.

The gunmen have been identified to be members of outlawed Indigenous People of Biafra (IPOB) who were said to have been enforcing the suspended sit-at-home order.

Reports have revealed that the said gunmen had stormed the market earlier to warn the traders not to violate the  Sit-at-home order by opening for business on Monday, according to a report by Sun Newspaper.

But the traders defied the warning and opened the market for business, prompting the gunmen to attack them.

The gunmen set two vehicles ablaze in the market before bombing the place, the newspaper reported.

The frightened traders scampered for safety during the attack and some of the traders sustained injuries in the incident.

“They came and threw a local bomb inside the market and everybody started running for safety. They (also) poured fuel on two vehicles and everywhere went up in flames,” the newspaper quoted a witness as saying.

This comes in a new wave of violence that has hit the Southeastern part of Nigeria over the past few weeks as it was reported previously that in a bid to fully enforce the Sit-at-home order, some unknown arsonists razed a truck laden with bags of cement in the university town of Nsukka, Nsukka Local Government Area of Enugu State.

The incident happened in the early hours of Monday, last week

The hoodlums were said to be enforcing the controversial ‘sit-at-home order’ along Beach junction in the area.

The police spokesperson in the state, Daniel Ndukwe, confirmed the attack to Newsmen.

Mr Ndukwe said police operatives observed that the truck was in flames while on patrol around the area.

He said no life was lost in the incident and that the operatives put off the fire with the help of residents of the area.

The police spokesperson, however, regretted that a part of the truck had been burnt before the operatives arrived at the scene.