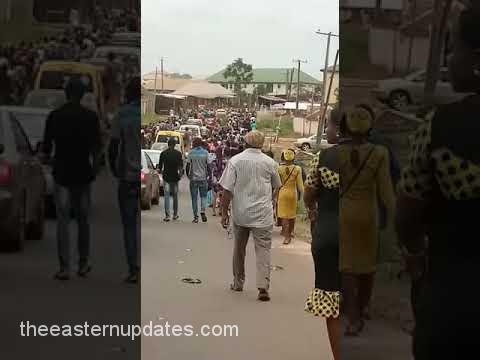 Enugu State saw a bit of some unrest today as some of the worshippers and supporters of the Adoration Ministry came out en-masse to protest the Enugu State Catholic authority’s sanction which was levelled upon Rev. Fr Ejike Mbaka’s attack on Peter Obi.

They had expressed their uneqivocal support for Mbaka, the Spiritual Director of the church while stating that the Catholic Authority was over the top with its punishments.

The supporters had also called for the immediate removal of the Bishop of Enugu, Callistus Onaga.

With leaves and placards, they chanted solidarity songs and repeatedly chorused “Onaga Must Go”.

The Eastern Updates reports that on Friday, Bishop Onaga had orchestrated and announced a ban on activities at the Adoration Ground in Enugu.

Mbaka drew the anger of his superiors after damning comments against Obi, a 2023 presidential hopeful and a former two-term Governor of Anambra State who is the candidate of the Labour Party (LP).

The cleric had declared that Obi cannot become the President of Nigeria because he is “stingy”.

Following outrage, Mbaka, in a lengthy open letter, apologized to Obi and the Catholic Church for his outburst.

Reacting to the development, the President-General of the Ohanaeze Youth Council, Mazi Okwu Nnabuike said Mbaka’s issue was a delicate one and should be treated as such.

Okwu said in the statement that there was a need for a delicate caution in handling Mbaka owing to his large followership. He also urged the Catholic Bishop of Enugu Diocese, Bishop Callistus Onaga to consider lifting the ban on Mbaka “to avoid escalation of protest and unrest in one of the most peaceful States in Nigeria.”

Okwu added that “since Fr. Mbaka has rendered an unreserved apology to the church and Mr Peter Obi, the Bishop should forgive him.

“Besides, as a Christian, I believe in prophecy but when the prophecy comes we return to God in prayers to avert it, we don’t think it’s a call for war.

“We apologize to Mr Peter Obi and the Catholic Church and urge Peter Obi accept the apology made by Mbaka and address his supporters. We also appeal to the church to lift the ban on the adoration ministry.”