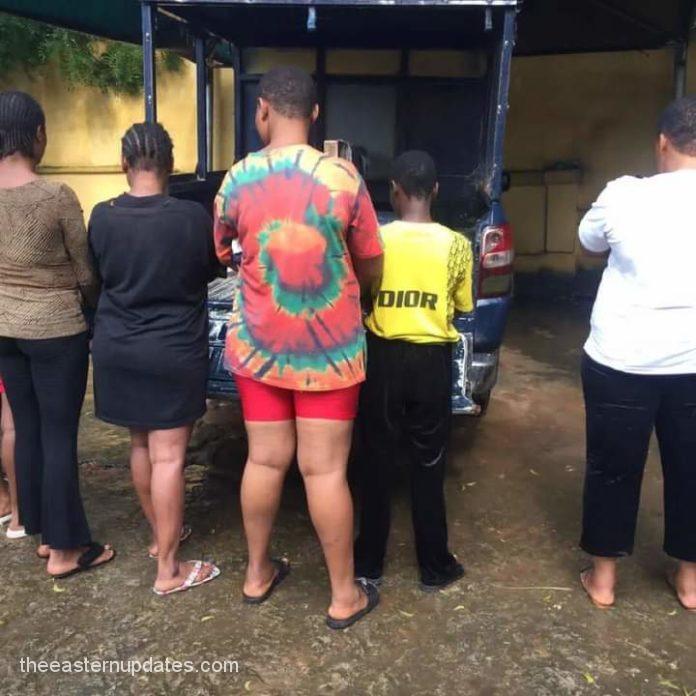 Fresh reports reaching The Eastern Updates have revealed that the Anambra State Police Command in a fresh crack operation has busted the Gally-Gally Hotel camp which is situated in Umusiome, Nkpor, Idemili North Local Government Area, where it was discovered that some teenage girls were being used for slave sex.

The Anambra State police officers who carried out the raid did it based on intelligence and tips from residents around the area and a total of about 35 teenage girls used for commercial sex slavery were rescued with about four of them already pregnant.

The rescued girls were reported to have been trafficked to the hotel where they were kept and were being used to engage in commercial sex where the proceeds went to the “madam”, who is currently on the run alongside the owner of the hotel.

The police also arrested three suspects, two men who guarded the premises, and the assistant manager of the hotel and recovered three pump action rifles, seven cartridges and the sum of N877,500.

The girls, on interrogation, said they came from different parts of the country, including Anambra, Delta, Rivers, Enugu, Ebonyi, and Benue States, among others.

Some of them said they were tricked into the business in the name of “coming to work as sales girls,” after which they were locked up and camped without their family members knowing their whereabouts.

One of them, who identified herself as Favour, said each time they became pregnant, they were allowed to have the baby, after which the baby was sold.

She said, “I was lured into the business by a friend who did not tell me that we would be used as prostitutes. I was told that I was coming to work as a sales girl, only to be trapped. I came there in August, 2021, to work as a sales girl. None of us could run away because of the guards there and the heavy security around us.

The police spokesman, DSP Tochukwu Ikenga, while parading the girls and the suspects at the Area Command, Onitsha, on Wednesday, gave the name of the hotel as Gally Gally Hotel.

Ikenga, who represented the state Commissioner of Police, Echeng Echeng, said the rescued girls would be handed over to the National Agency for Prohibition and Trafficking in Persons, for proper “rehabilitation”, “reformation” and “reintegration” while the suspects would be charged to court.

He added that the owner of the hotel and the other suspect fled when the police team led by the Onitsha Police Area Commander, Mr. John Obuagbaka, stormed the hotel.

“The manager of the hotel and others are still at large but we arrested six others that used to receive the girls on behalf of the owner of the hotel, including his assistant, one Mrs Uzo Ifeoma (35) and two security men, Chidiebere Alaka and Chidera Alaka, who ensured that the girls did not run away once they come into the hotel.

“Among the items recovered from them included, three pump action guns, seven live cartridges and N877,500 and two registers where names and money collected from them were written.

“Following a rigorous analysis of crime trends and pattern, the command’s operatives, working on information, busted the hotel, where they use children between the ages of 14years – 17years for sex slaves, prostitution and baby factory.

“We also have NAPTIP here, whom we shall hand over the victims to for the welfare and rehabilitation of the children. All suspects will be charged to court at the end of investigations.”

The NAPTIP officials, who were on the ground, did not talk to the press.