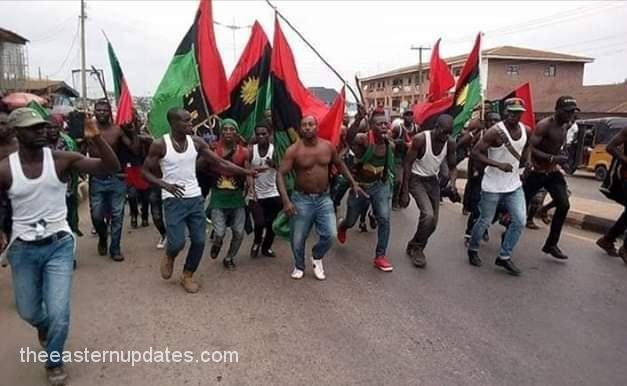 The Indigenous People of Biafra (IPOB) has warned those involved in the killings, kidnappings and criminalities going on in the South-East region to stop if they want they want to make any headway in the Biafran agitation.

The secessionist group pointed out that those who claimed to be members of IPOB and others need to understand that ‘enemies’ will capitalise on the killings and insecurity in the South-East to blackmail the group and its peaceful agitation.

It specifically said, ‘Anybody who wants our leader, Mazi Nnamdi Kanu, out of the DSS dungeon and the realisation of Biafra freedom must stop being involved in criminalities going on in the South-East.’

In a statement on Saturday which was obtained by The Eastern Updates, the IPOB Media and Publicity Secretary, Emma Powerful, noted that most of the killings always happen a few days before Kanu’s court dates, thereby making it look as if the group perpetrated it.

Powerful said, ‘Biafrans should take cognizance of the timing of these heinous and barbaric acts of violence and murder. Our people and the world community should note that most of these heinous killings happen a few days before our leader’s court dates.

‘For instance, the army couple, the house of assembly member, the pregnant Hausa woman. These killing could not reasonably have been done or perpetrated by IPOB.’

While expressing its displeasure over the criminal activities, the group said it’s leader, Kanu wants any person who desires his genuine freedom to stop all forms of criminalities going-on in the region and ensure he or she work in tandem with the structure he put in place and joined with them to move this struggle forward.

It further said the criminal activities will only complicate Kanu’s case and turn his people against him and against the Biafran cause which, according to the group, is what the Nigeria government wants.

It pointed out that every genuine member of IPOB should focus on the struggle to liberate its people and not be involved with criminality of any sort and ensure that the land is peaceful and conducive.

The statement read in part, ‘Our people and those who claimed to be IPOB members need to understand that enemies will capitalise on the killings and insecurity in the South East to blackmail IPOB and our peaceful agitation.

‘These atrocities are being committed by people who want to ensure that Mazi Nnamdi Kanu doesn’t come out of DSS custody.

‘Again, these killings are also calculated to intimidate and blackmail the judiciary who might be open in granting him justice because our leader MNK has no case to answer.

‘The North enjoy such luxuries and criminalities going-on here but certainly not Igbos. Can you imagine how difficult it is to get our people in custody released or secure their bail?

‘Each time some of these killings occur in the East, our people are killed in the North, some are stopped on the road, marched out of their vehicles and killed. These things are usually not reported by media houses in Nigeria.

‘Remember that between 1967-1970, about five million Biafrans were killed for no just cause. Nobody including the international community did anything about it. Let us not play into the hands of our enemies because they are again gradually but systematically killing us while setting IPOB up to take the fall.

‘They are now engaging in state-sponsored killings in order to give IPOB a bad name. This is why immediately after these killings and atrocities occur, there won’t be any kind of investigation but the news headlines would attribute it to IPOB/ESN.

‘You can confirm how accusing fingers were pointed at IPOB as those behind the kidnap of the Methodist bishop without proper investigations because they hate IPOB/ESN operatives.

‘IPOB does not have as much money or resources as the Nigerian government to embark on the kind of propaganda the government is embarking on against IPOB.’