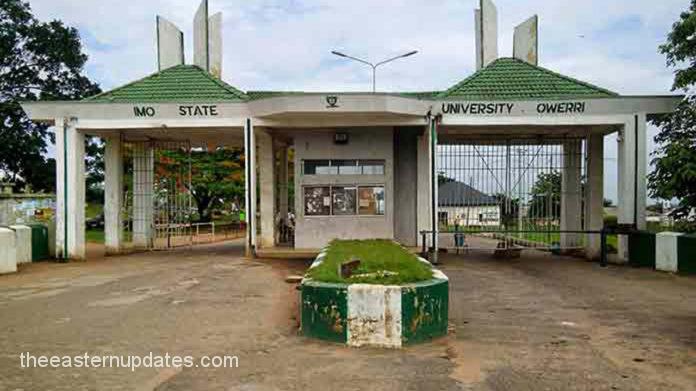 A non-governmental Organisation, which has been identifies as Every Child Education Advance-ment Foundation (ECEAF) has decried the plan by the Imo State Government to expunge some sections of the government whitepaper on the Imo State University, Owerri (IMSU) that indicted the former Pro-Chancellor of the University, Alex Mbata.

Mbata, who was at the weekend allegedly adopted by the State Governor, Hope Uzodimma as a senatorial candidate of the All Progressives Congress (APC) for Owerri zone in the 2023 elections was heavily fingered by the Professor Chinedu Nebo’s Visitation Panel report (2012 – 2019) which the government had since released a whitepaper implicating him.

In a suit filed before the High Court of Owerri with No. HOW/554/2022 between Alex Mbata verses Government of Imo State and Attorney General of Imo State, Mbata is seeking an Order of Judicial Review by way of certiorari to  the Honourable Court for the purpose of  quashing the Imo State Government Whitepaper on the Reports of the Visitation on Imo State University, Owerri.

Mbata expressed in the suit that he is the person being indicted by the Whitepaper released by the Imo State Government particularly at page 45 paragraph 8.2(vi), page 49 paragraph 8.14(x), page 56 paragraph 8.55(ii) respectively.

However, the group, which is reputed for its advocacy for the promotion of quality education in Nigeria in a statement released in Owerri, signed by its Director of Publicity, Dominic Nwankwo,  accused the state government of a clandestine move to edit the whitepaper in a bid to favour Mbata.

While advising the state government to desist from such a move as it would be counter-productive since the document is already in the public domain,  also reminded them of the negative effect such action if taken would have on the state government especially in the fight against corruption.

The group said: “It is uncharitable for government to set aside its own whitepaper simply because it is desperate to field  someone as a senatorial candidate, adding that such move will be fruitless owing to the fact that at the time Mbata was screened by the APC to stand in for the election, the whitepaper was still valid and subsisting.”

“We are aware that APC nomination form specifically asked under oath if an aspirant is convicted or indicted by any government panel. So, if Mbata answered in the negative, he is automatically disqualified going by the Electoral Act which was recently signed into law by President Muhammadu Buhari and other extant laws of the land. Therefore, it is too late for the government to institute any suit seeking to set aside the Whitepaper since it is already a public document.

The group through its lawyer had threatened to go to court on the matter.  In a petition dated May 5, 2022, addressed to the Screening Committee of the APC, Imo state chapter, by their lawyer, N.O Chukwuezi and Co, of No.100 Okigwe Road, Owerri, the group revealed part of the whitepaper.

The petition captioned, “The indictment of Prince Alex Mbata by the recently published White Paper on Imo State University Owerri. We are solicitors to the Incorporated Trustees of Every Child Education and Advancement Foundation (ECEAF) of No. 47 Okigwe Road, Owerri, Imo State who we shall hereinafter refer to as “our clients” and on whose mandate and instructions we write you this letter.

“Our instruction shows that Prince Alex Mbata was the Pro-Chancellor of Imo State University sometime ago under the administration of former Governor Rochas Okorocha. At the end of his tenure as Pro-Chancellor, a Visitation Panel was set up to investigate the affairs of the University under him as the then Chairman of the University’s Governing Council. After the conclusion of the Panel’s work, Imo State Government accepted its Report and published the same on its White Paper of 28th July, 2020. In the said White Paper, Prince Alex Mbata was indicted for.

“Unilaterally changing and replacing the consultants for the University’s TETFUND projects from Three-Dimensions (3-D) to Mayfair Projects Ltd., Abuja without approval and contrary to laid-down procedures by TETFUND, and which change of consultants impeded the project evaluation for earned certificates,” it stated.

The whitepaper in paragraph 5.1 titled “Abandoned Building contracts said: The abandoned building projects have been a source of worry and embarrassment to Imo State University and Imo State Government, and people as a whole. The abandoned buildings are made up of three numbers of TETFund Intervention Projects, namely: Faculty of Business Administration, Faculty of Science and Faculty of Education Annex Building Projects; and two numbers of NEEDS Assessment Projects, made up of the New Main Library and the Medical Centre Buildings.”

The report further stated that, “Contractor mobilised to site on Monday, 13 January 2015, but commenced work in the last week of March, 2015 due to difficulty in getting occupants of the buildings on the site to vacate.

“By 16 June 2015, the contractor had started having problems with the delayed release and payments of his earned certificates. Between 16 June 2015 and up till 14 October 2015, Arisa Adifice and other contractors of identified TETFund abandoned projects made four joint requests (16 June 2015, 24 August 2015, 3 September 2015 and October 2015) for payments of earned certificates without success. By December 2017, the contractor abandoned the project,” the whitepaper stated.

It further stressed the need for the provision of a conducive environment for teaching and learning especially in the Faculty of Business Administration,  Faculty of Science and Faculty of Education Annexes, building and others that were also abandoned said, “three dimensions (3-D) Consultant was engaged at the inception of the contract but due to reasons best known to the then Chairman of Council, Prince Alex Mbata, who it was alleged, replaced 3-D Consultant with Mayfair Projects Ltd, contrary to laid down procedures by TETFund. It was alleged that the Chairman of Council insisted on citing the vouchers and the cheques before approval for payment. All of the above issues impacted negatively on the execution of the project.

“The resulting delays in both raising and payments of earned certificates severely retarded the construction work and made the completion date unattainable.

“It is advisable that these projects be completed to add to University in its teaching, learning and research programmes, and to be in good standing with Nigeria Universities Commission (NUC) and other relevant regulatory bodies for accreditation of courses,” the whitepaper noted.

However, most members of the academic community who spoke on condition of anonymity frowned at the rate at which TETFund projects in the institution were abandoned thereby jeopardizing the interest of staff and students who had been deprived of the comfort of a conducive environment for teaching, learning and extra-curricular activities even when the relevant, agency TETFund had made the necessary provisions in terms of funds and logistics.