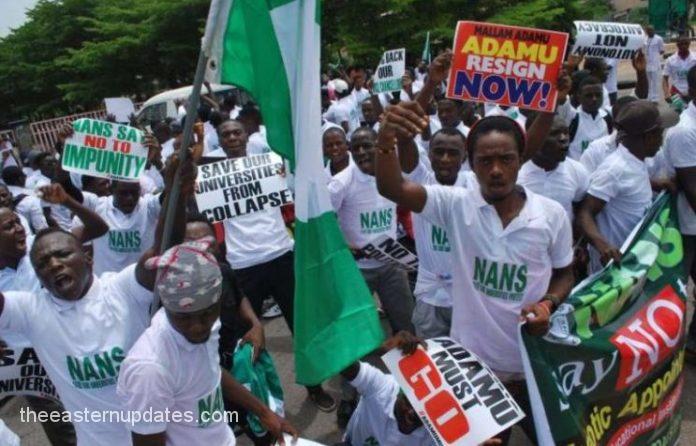 The National Association of Nigerian Students, NANS Zone F, South East has called on the federal government and political office holders in Abia State to quickly look into the security concerns in the state, particularly the incessant abduction in Umunneochi community as well as the ongoing strike by university lecturers, warning that NANS will be forced into embarking on mother of all protests in the State.

NANS Zone F Secretary General Com. Frank Eme Orji who spoke at the Abia Student Community joint press conference which was monitored by The Eastern Updates said ‘it is very unfortunate that Nigerian Students in various campuses are facing a very pathetic issue as the case may be regarding the ASUU strike which has made various Nigerian Students not only in Abia state even in Nigeria as the case may be most of them have been faced with a whole lots of challenges because it is said that an idle man is the devil’s workshop.

‘At this juncture, we are calling on the federal government to do the needful, it’s quite unfortunate that we have a whole lot of them who are not concerned about student welfarism if you come to the state today you will discover there are lots of politicians today celebrating their children because they are all schooling abroad.”

‘Coming down to Nigeria we have a whole lot of parents and most students who are training themselves, most of them are unable to afford some certain bills to take care of themselves abroad that’s why Government is not interested about what is happening’.

‘So we are calling on the federal government to come to our plead, it is quite unfortunate that in a time as this ASUU has embarked on a strike Reasonable has been said or done about these things, and tomorrow you will keep on telling us that we are the future leaders, we believe that we are also today leaders as the case may be we are using this medium to join our voices to call on the federal government to do the need full.”

‘Quite importantly we have a very sensitive issue as the case may be which has also given a major concern to the student community, passes by and any other person that has conscience we are talking about the kidnapping case at Uturu Okigwe route that has become more like a routine in the state.’

‘We had a very serious case where students community student from Abia state University where the kidnaped ransom was also paid.’

‘It is quite unfortunate that we are in this present generation 21 century some persons are been kidnaped? And nothing has been done to ensure that such menace are been taken care of’.

‘I most at this juncture also commend the government of Abia state because I know we have able to engage them physically and otherwise we also leant that they initiated some process to ensure that the need full is done.”

‘We also want them to also step up to also encourage the security agencies because if you’re coming to that route as we speak you discover that this men has even taken it as a job. We also had the news of the Prelate being kidnapped and a ransom of 100 million naira was paid, if such persons were been kidnaped how much more the person that are poor and can’t afford such money what is their faith, so we are calling on the government even though we learnt they are doing something about it to also try and hasten it up so the lives of students should not be taken for granted. We believe that security should be taken where off, we also know we have local security agencies, town hall as the case may be”.

‘Let me also use this opportunity to reach out to our leaders irrespective of their political parties affiliation may be. We have the Senator representing Abia North district Sen. Orji Ujor Kalu, we also have Hon. Onyejiocha representing Umunnochi/Isikwuato Federal constituency, we have Barr. Emaka Okoroafor and Hon. Okay these are house state members and federal, all these persons are coming from Abia North, they should not say this is Abia state they should leave all the responsibility on Abia state government even though they are still needed to do the need full.”

‘If the student community are facing all this it is quite unfortunate, it is also unfortunate that most of them are just interested about the election, their only interest is to come back and know how to do that, but there are priorities that should not be taken for granted.”

‘We are calling on all our leaders irrespective of the party even those aspiring for one position or the other, they should come back and put hands together to make sure that this issue is handled the roads are also bad they should do palliatives on that road so that the student community will enjoy their stay, you cannot be a student and you’re learning with fear, you cannot be a student and you have in mind if that if you want to travel your life is equally at risk.’

‘At the same time they should also assist the management of Abia state University because we’ve been able to engage with them critically and otherwise, I know that they have also done their own need full to ensure that the needful is done.’

‘So we are calling on the federal government the state government and all this our leaders representing in Abia North to come back and all those that need to be involved to make sure that the need full is done or the Nigerian Students will be left with no other options than to exercise our constitutional franchise which will be a massive protest, we are giving them 7 days from now if nothing is done it will be unfortunate for us to allow Nigerian Students to come down the streets we are going to do it in a way that the government of the day, of the federal, will understand the power of the Nigerian Students.’

The federal government was yet to react to the call by the students.