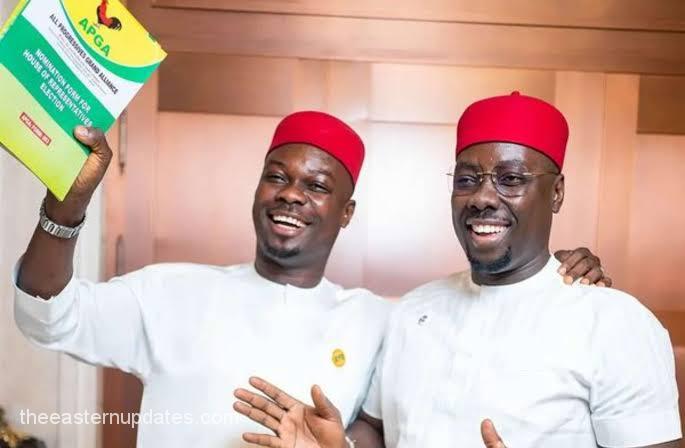 Popular businessman, Obi Iyiegbu, popularly known as Obi Cubana, has congratulated his brother, Ikenna, who emerged as the candidate of the All Progressives Grand Alliance (APGA) for Idemili North/South federal constituency in Anambra.

Obi Cubana, in a video he shared via his Instagram page, shared a video of his ecstatic brother jumping on him after his victory.

In the caption, the club owner said, ‘This one sweet me. Sweet victory. Congratulations my blood.’

Read Also: Gunmen Should Be Treated As Terrorists – APGA To Govt

Ikenna would be working effortlessly to defeat the candidate of the Peoples Democratic Party, the All Progressives Congress, and others in the 2023 election.

This is coming at the time the National Youth Service Corps accused Oduah of absconding from service during the 1982/1983 service year.

Oduah on Friday gathered 278 votes to emerge the winner, while the first runner up Tony Nwoye got one vote and John Okechwu didn’t get any vote.