HomeFeaturesOsinbajo Lambasts Killers Of Harira Jubril And Her Children
Features

Osinbajo Lambasts Killers Of Harira Jubril And Her Children 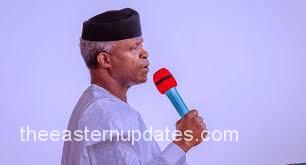 The Vice President of Nigeria, Prof. Yemi Osinbajo, has reacted to the killing of a pregnant woman, Mrs. Harira Jubril, and her children in Anambra State, describing the crime as not only callous, but brutal and demeaning.

He expressed fears that the incident was capable of creating ethnic conflict across the country and hence must be condemned by all and sundry.

The Vice President made this assertion on Wednesday, while speaking with journalists shortly after meeting All Progressives Congress (APC) delegates in Makurdi, Benue State in continuation of his nationwide consultations with party delegates and other stakeholders ahead of the APC presidential primaries.

‘What took place in Anambra with the killing of a woman and her children demeans us all. It is such a callous act and so brutal. And I think that we must be very careful, as a people, with this type of killings that are going on, especially where it is obviously to create such horror, annoyance and create a situation where we begin to have ethnic conflicts again and all that.

‘And I think we must all be careful and condemn it in the strongest possible terms, there is no excuse for it whatsoever. We must not allow a situation where we get to the point where we even countenance individuals who can do this sort of thing.

‘How does anyone kill a woman and her children? I think it is such a terrible tragedy condemnable by all. Mr President has spoken about it and I just want to join my voice with those of others who are completely outraged by it.’

Earlier, President Muhammadu Buhari had strongly condemned what he described as “wild, barbarous and wanton killings of innocent people” in the South-East as well as the other parts of the country, which he also described as “deeply distressing.” The President then warned the perpetrators of these acts to expect tough responses from the security forces.