Rain Of Defections As Ekweremadu, Others Defect From PDP 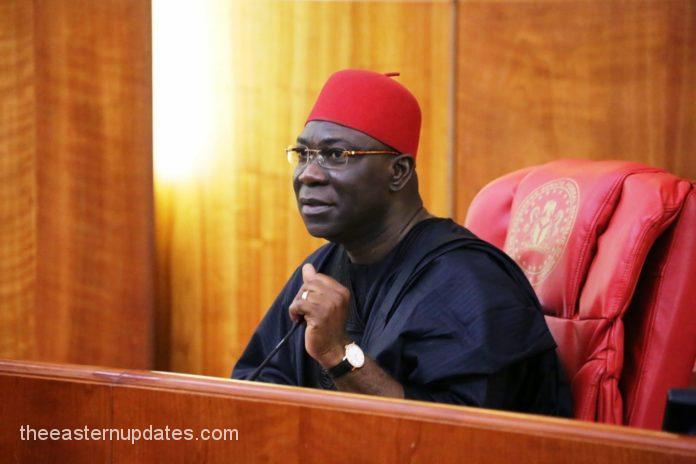 In a suprising turn of events, at least three governorship aspirants have withdrawn from the Peoples Democratic Party, PDP during the Governorship primary elections which were in Enugu State today.

He said, “we wish to inform our supporters and Nigerians that the former Deputy President of the Senate and foremost governorship aspirant in Enugu State, Senator Ike Ekweremadu, will not be participating in the PDP governorship primary election scheduled for this Wednesday, May 25, 2022.”

Similarly, Captain Everest Nnaji and Joseph Onoh have announced their withdrawal from the race.

Onoh announced that he was not backing Mr. Peter Mba who he said is Governor Ifeanyi Ugwuanyi’s choice.

Also in another news, seven out of the nine governorship aspirant of the ruling Peoples Democratic Party, PDP, in Abia State, have formally withdrawn from the governorship primaries.

They announced their withdrawal from the PDP primaries after an emergency meeting at the Umuahia residence of the immediate-past Secretary to State Government, SSG, Dr Eme Okoro.

With this development, only two aspirants – Professor Isaac Ikonne, and Mayor Lucky Igbokwe (Don Lulu), are left in the race.

Some PDP chieftains present at the meeting were former Senate President and the Secretary of PDP Board of Trustees, BoT, Senator Adolphus Wabara; 2007 PDP governorship candidate and ex-Chairman of the Niger Delta Development Commission, NDDC, Chief Onyema Ugochukwu; Obinna Ekekwe.

They cited the use of an “imaginary delegates list” and non-compliance with due process and Internal democracy by the party in the conduct of the primaries as reasons for their action.

The aggrieved aspirants accused the party leadership of impunity and non-regard for the party constitution in their desperation to foist an anointed candidate on the party.

The aggrieved aspirants in a statement entitled:’Notice of Non-Participation in the Abia PDP Gubernatorial Primaries’ said:

“The last couple of weeks has been tortuous as we battled hard to navigate our party, the Peoples Democratic Party (PDP) away from a self-destructive path.

“The essence was to create an unfettered democratic space and a level playing field for all aspirants vying for all elective offices in the state, to participate equally in the primary elections.

“That was not the case and of course what we are witnessing is a shambolic process driven by a procured court injunction.

“To make matters worse, the use of only imaginary 3-man Adhoc delegates to the exclusion of the party’s statutory delegates in the primary elections to elect our candidates even when INEC the nation’s electoral umpire, has unequivocally stated that no congress held in Abia State for that purpose, has no doubt put the party and her candidates in a quagmire.

“The implication for our party is grave and as such has put all ongoing primary exercises on quicksand. There was no doubt that Abians are tired of being subjected to being the butt of jokes and ridicule from their peers, particularly those from the contiguous states that were hitherto far behind Abia State in the development index in the time past. That was the narrative we sought to change when the campaign took off.

“Unfortunately, the ugly developments ignited by a rapacious ambition to maintain the wicked governance status quo of imposition and godfatherism have aborted this quest in PDP.

” We will not be part of this charade.
We are, therefore, withdrawing from the exercise, which means that we will not be part of the PDP governorship primary election that holds in Abia State on Wednesday 25th of May, 2022 as doing so would have amounted to an endorsement of illegality that is already being challenged in the courts.

” We, therefore, ask all our people, our teeming supporters and Ndigbo to remain calm, keep the faith and wait for the new direction, which will be announced very soon.

“What is important is that the campaign to liberate Abia State would surely assume a new dimension. The time is now.

“Thank you for always being there for me and the campaign. Together we shall triumph.”