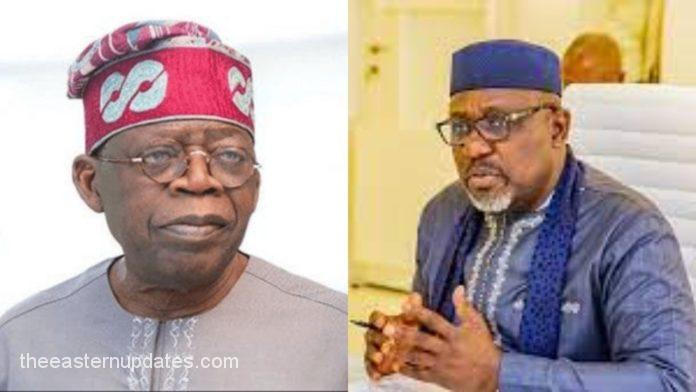 Rochas Okorocha who is an All Progressives Congress, APC and embattled Presidential aspirant has opined that a fellow aspirant and National chairman for the APC, Bola Tinubu is in distress and has an entitlement menality.

Rochas Okorocha had reiterated that Tinubu feels the APC should compensate him with the Presidency for his contribution to the party.

Appearing on Arise TV, the Imo West Senator said, “I think it’s just natural, and that everybody should know, and I don’t know what’s behind the mind of Tinubu but I respect him a lot, but I think Tinubu is in distress because he feels that it’s a time to compensate him on the basis of the role he played in the formation of APC which some of us were part of it.

Read Also: More Troubles For Okorocha As EFCC Moves To Arraign Him

“So, everybody has a reason why he’s coming out, and these things define power and strength.

“He [Tinubu] believed that he has made people and this is the time people should allow him or make him or something. More like a reward system.”

The former Imo State Governor stressed that the ruling party should zone the presidency to the South-East in 2023.

In another report concerning the embattled Statesman, the Economic and Financial Crimes Commission (EFCC) said that its operatives laid siege to the residence of former Imo Governor Senator Rochas Okorocha because of his refusal to honour the commission’s invitations.

It said Okorocha jumped administrative bail granted him by EFCC.

It also alleged that attempts to arraign Senator Okorocha were stalled twice owing to the absence of the ex-Governor who reportedly evaded service of processes.

The EFCC made the clarifications in a statement by its Head of Media and Publicity, Mr. Wilson Uwujaren.

The statement reads: “Operatives of the Economic and Financial Crimes Commission (EFCC), today May 24, 2022, arrived at the Maitama, Abuja home of a former Governor of Imo state, Senator Rochas Okorocha, to effect his arrest.