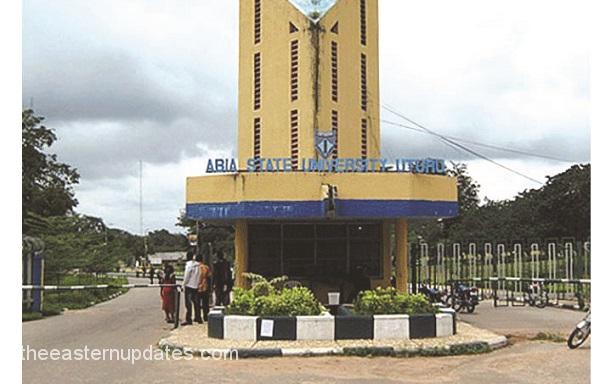 As a result of the rising spate of insecurity in the Abia State University, Uturu and its surrounding environs, the school’s governing committee has announced an indefinite closure of the institution after a protest organised by students against abductions and killings by herdsmen which turned violent on Thursday.

The school gave the directive in a notice titled “Mid-Semester Break.”

According to the notice, the school said the break would start on Friday as it asked students to vacate their “halls of residence and await further directives on the date of return.”

As a result of the incessant attacks and kidnappings, residents of Uturu, Okigwe communities and the students on Thursday had blocked the Umuahia-Enugu Expressway to protest incessant kidnapping, killing of students, lecturers and travellers by suspected herdsmen.

The protest, however, became violent when security operatives intruded into the demonstration by scaring protesters away with gunshots.

Some students in a video were seen scampering for safety in the ensuing melee amid sounds of gunshots.

There have been growing concerns in the South-East over the rising cases of killings and abductions in the region.

Indigenes of the Uturu community in Isuikwuato council area of Abia State, have barricaded the Okigwe – Uturu – Isuikwuato road, protesting the high rate of kidnapping of students and motorists in the area.

The protest which began along Uturu road close to Marist Brothers Secondary School, saw protesters calling on the Imo and Abia state governments to take urgent actions to curb the kidnapping and killings of their people.

One of the protesters told Newsmen that many natives of Uturu community and students of the Abia State University,(ABSU), Uturu, have been abducted and made to pay ransom while others lost their lives to the hoodlums.

The protesters lamented that the situation is affecting the economy of their community and called for the security agencies to redouble efforts to end the menace.

They said; “The road has become a source of terror for motorists and passengers who are mostly students. Many people including indigenes of Uturu community have been kidnapped and ransom paid while others lost their lives. There are more than six security checkpoints are along the road,but people are still being kidnapped. The Imo state government and their Abia counterpart must urgently take action to end kidnapping and killing of people on Okigwe – Uturu- Isuikwuato road. We are no longer safe. Many people have been Killed.No day at passes without these hoodlums kidnapping motorists who are mostly students.”

A few days ago, a motorist was shot dead while some passengers suspected to be students of the ABSU were abducted.