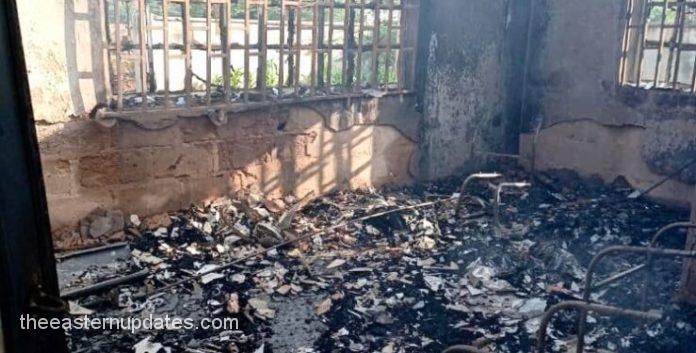 A group known as the International Society for Civil Liberties and Rule of Law has condemned the spate of attacks on critical public utilities by government security forces and non-state actors fighting parties across the Southeastern part of the country.

The Rights organisation based in the South-East, described the Monday’s arson of the area administrative headquarters of the Enugu Electricity Distribution Company located at Ogidi in the Idemili North Local Government Area of Anambra State, with the burning of 32 operational vehicles, as unacceptable, demanding a thorough investigation into the incident.

The Eastern Updates had on Monday, reported that rampaging arsonists had in coordinated attacks razed some buildings located inside the Idemili North Local Government Headquarters administrative offices; the area’s Magistrates Court; and the EEDC building with 32 operational vehicles totally razed.

The police in Anambra had since declared the incident as arson and had refused to pin it on any group, and no arrested had been made so far.

But the group, in a statement signed by its principal officers, Emeka Umeagbalasi and Obianuju Igboeli, made available to our correspondent on Wednesday, said the attack had the characteristics of self-defence violent agitators and that of the splinter groups which they said were backed by the government and its security forces.

The statement partly read, ‘Unlike other anti-humanity and property crimes and violence across the South-East, questionably and controversially blamed on “ESN/IPOB” by the country’s untrained and human rights abusive security forces, the latest late Sunday night attack circumstantially had the ‘trademarks’ of self-defence violent agitators and splinter others or the suspected Nigerian Government and its security forces backed ‘fifth columnist counterfeiters’.

‘It is also on record that some critical public utilities such as those providing banking, health, educational, telecommunications, water and electricity supplies and services in Nigeria especially in the South-East part of eastern Nigeria have in recent years been targeted for burning or destruction by both state actor and non-state actor armed entities or fighting parties.

‘Cases abound where security forces have been strongly suspected to have remotely or clandestinely carried out such attacks for purpose of framing or criminalisation and stigmatisation of ‘enemy’ non-state actors. There are also cases where such attacks have been circumstantially located and trademarked in the doorsteps of self-defence violent agitators and splinter others or those clandestinely raised by the Government to counterfeit the former.

‘We had in our latest special report of 13th May 2022 identified security forces of Nigeria as being substantially accountable for killing defenceless civilians and rapacious destruction of their properties especially in the South-East part of eastern Nigeria, labelling them ‘ESN/IPOB or ESN/IPOB properties.’

While sympathising with the management of the power distribution company and the entire electricity consuming population in Ogidi District including Awada, Obosi, Ugwuagba, Owerre-Aja and others over the material and social losses incurred as a result of the incident, it called for immediate restoration of full power supply in the affected areas since critical power installations were not affected.