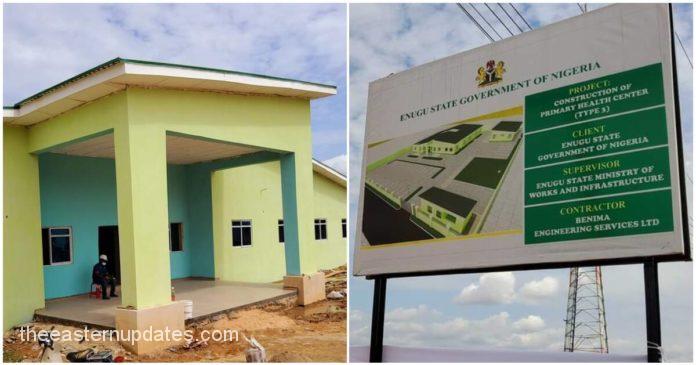 The Enugu State Primary Health Care Development Agency (ENS-PHCDA) has revealed that Governor Ifeanyi Ugwuanyi’s administration has been up to set up and operationalised 10 type-3 Primary Healthcare Centres (PHC) in Enugu State in less than three years.
The Eastern Updates reports that the Type-3 PHC centres, which is part of the concept of Primary Health Care Under one Roof (PHCUoR), is a centre with the full complement of medical staff, equipment and structure painted green and white.
The Executive Secretary of ENS-PHCDA, Dr George Ugwu, told reporters in Enugu on Thursday that the government first revitalized three of the existing PHC centres to type-3 PHC standard in three Local Government Areas (LGAs) within three senatorial zones.
Read Also: Ama Brewery Commissioned By Gov Ifeanyi Ugwuanyi
Ugwu said that the first three revitalized type-3 PHC are situated in Abakpa PHC in Enugu East LGA (Enugu East Senatorial zone); Basic PHC in Oji River LGA (Enugu West Senatorial Zone and Obollo Afor PHC in Udenu LGA (Enugu North Senatorial Zone).
According to him, the remaining newly built seven type-3 PHCs are located in Uzo Uwani, Isiuzo, Udenu, Igbo-etiti, Igboeze South, Ezeagu and  Nkanu East (Nara community) council areas of the state.
‘The type-3 PHC centres are brand new and functional healthcare delivery buildings as recommended by PHCUoR guidelines with professional medical staff, drugs, medical equipment and medical consumables.
“The 10 of the type-3 PHC facilities have a full complement of medical staff needed in a PHC facility and run 24/7 services like in other major hospitals in the state.
“The massive investment in rural healthcare in the state is in line with our amiable Gov. Ifeanyi Ugwuanyi rural development and empowerment drive.
“These type-3 PHCs and others still under construction have reduced the health burden of the rural people, delivered easily accessible and affordable healthcare to them.
“The functional type-3 PHCs and other PHCs totaling 518 PHC centres in the state have also stopped the vast majority of our rural dwellers travelling for hours and added stress to major metropolises to access health except on referral basis,” he said.
The ENS-PHCDA boss said that the Agency had continued to ensure regular supportive supervision and guidance to the staff of the PHCs in order to ensure that they daily deliver quality healthcare to the people, especially our rural residents.
Ugwu said that the state government had set-up Community Management of Acute Malnutrition (CMAM) centres to ensure that no child in the state suffers from malnutrition by providing food/feeding therapy for them.
He said that the CMAM centres are located within the three senatorial zones in Abakpa PHC in Enugu East LGA,, Basic PHC in Oji River LGA and Obollo Afor PHC in Udenu LGA.
Ugwu also noted that Gov. Ugwuanyi enacted the Health Sector Reform Law that established the ENS-PHCDA as a semi-autonomous and self-accounting agency in order to respond to health emergencies especially containing outbreak of diseases.
“Today, the ENS-PHCDA has one of the most befitting headquarters offices in the state, which has further attracted national and international health partners to work with the state and hold important meetings in the ENS-PHCDA headquarters.
The major international health partners – WHO and UNICEF – had continued to laud the state government for its giant stride in totally revamping the PHC services and vaccination programmes offered to work for the teeming population in the state.