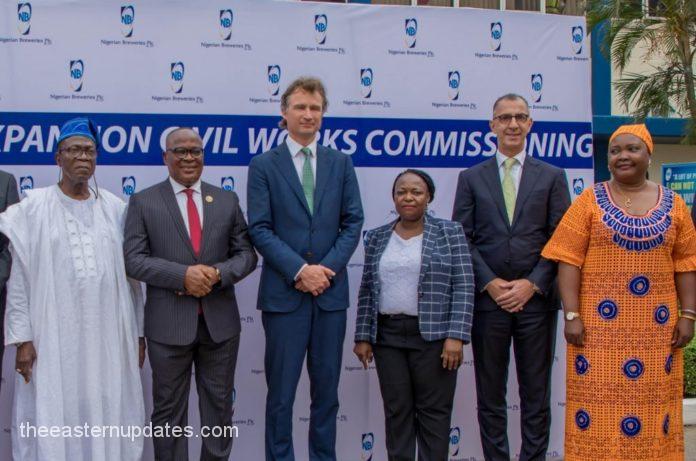 As one of their commitment to broadening their business webs and impacting more in the Southeastern region of Nigeria, Nigeria’s foremost brewing company, Nigerian Breweries Plc, has commissioned civil works of its expansion project at Ama Brewery, Enugu State.

This historic event was performed as part of activities marking the visit of the CEO/Chairman of the Executive Board of HEINEKEN N.V, Dolf van den Brink to Nigeria, accompanied by the HEINEKEN Chief Financial Officer, Harold van den Broek, and HEINEKEN President for Africa Middle East and Eastern Europe, Roland Pirmez.

The commissioning ceremony was also attended by representatives of the Central Bank of Nigeria, the Ministry of Industry, Trade and Investment, the Nigerian Investment Promotion Council, the Manufacturers Association of Nigeria, traditional rulers from the host communities

Speaking at the commissioning ceremony held on Wednesday, April 27, 2022, the Governor of Enugu State, Rt. Hon. Ifeanyi Ugwuanyi, who was represented by Secretary to the State Government, Prof. Simon Ortuanya, commended NB Plc for taking the bold step to expand its current brewing capacity which demonstrates its commitment to the Nigerian economy and to Enugu State

According to Ugwuanyi, when completed, this project would enhance the industrial growth of Enugu and Nigeria, while improving the company’s market share.

While expressing profound appreciation to NB Plc for its corporate investment in Enugu State, he assured the company that the State would continue to formulate favorable policies and friendly tax regimes and provide a regulatory framework that would make its business thrive.

“This investment of 112million euros in the Ama Brewery expansion project is a laudable decision. This move would not only generate revenue to the state and create more job opportunities for our teeming youths but also widen the market share of HEINEKEN”, he said

In his remarks at the occasion, the Chief Executive Officer, HEINEKEN, Mr. Dolf van den Brink, stated that the investment in Ama Brewery is further demonstration of the long-standing history and relationship between HEINEKEN and Nigeria, which dates back to 1946

“Based on our longstanding role in the past and present, HEINEKEN is investing €112 Million in this important Ama Expansion project because we see ourselves as playing a major role in Nigeria’s future. We are proud to be part of the growth and development of this wonderful state and country. We look forward to a continued partnership with the great state of Enugu”, he said.

In different speeches delivered at the event, the Chairman of Nigerian Breweries Plc, Chief Kolawole Jamodu and MD, Hans Essaadi spoke on the impact of the project to the state and the region as a whole.

According to Chief Jamodu, the project represents an extension of the win-win relationship between the company and the state, noting that the state has provided the needed operating environment for companies like NB to thrive, and in return the company continues to play its role as a responsible corporate citizen, with payment of over N400 million in employee taxes, levies, and other duties to the state government in 2021 alone.

In the words of the MD, Hans Essaadi, “Indeed, our partnership with the state government has also seen us invest hundreds of millions of naira in various community projects and social investment initiatives in the areas of Health, Education, Community infrastructure, and Sports development,”

The first phase of the project is expected to be completed in 2022.