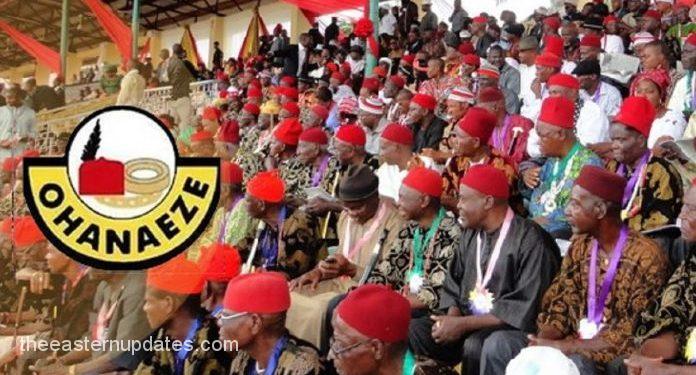 Apex Igbo socio-cultural organisation, the Ohanaeze Ndigbo has called on the Igbo living in the north to remain calm, focused, and go about their normal businesses despite recent developments.

This is as the Obi of Onitsha, Igwe Nnaemeka Achebe, disowned news claiming that he had called on Igbo to return home in the face of recent happening in the North.

National Publicity Secretary of Ohanaeze, Dr. Alex Ogbonnia told Daily Sun that those fanning embers of disunity in Nigeria would not force the Igbo out of the country.

The apex Igbo socio-cultural organisation described Igbo as builders and not destroyers and admonished them to continue to coexist peacefully with their host communities.

‘We have said it again and again that the Igbo are builders. Our people are reputed for hardwork, resourcefulness, industry and ingenuity. So, we see anywhere we are as home and we make it comfortable.

‘We have paid our dues in this country, so, what’s happening is that some persons are just creating bad blood as part of the grand plot against our people ahead of the 2023 Presidency.

The Obi of Onitsha has since debunked the fake news. But we urge our people to remain calm,’ Ogbonnia pointed out.

However, in a statement by Chief of Staff to Ime Obi Onicha, Osita Anionwu, the foremost monarch urged people to disregard the baseless attribution concorted and linked to him.

“The attention of Ime Obi Onicha palace has been drawn to a statement to the effect that His Majesty, Nnaemeka Achebe, Agbogidi, Obi of Onitsha has called on every Igbo living in the North to come back home immediately.

‘The statement which has gone viral on social media is fake and should be discountenanced,’ the palace stated.

Meanwhile, the Christian Association of Nigeria (CAN), youth wing, has faulted the call by some section for Igbo to evacuate from the northern part of the country.

National President of the group, Belusochukwu Enwerem described those angling for the evacuation as enemies of the country.

‘What is happening is unfortunate but I believe it is the best time for us to unite. As Christians, Muslims, southerners or northeners, let’s seize the opportunity of the incident of Deborah’s killing to unite.

‘We are not crying beccause of Deborah’s death but we are crying because of what has left us a long ago while we are still living – unity, harmony, peace, humility and love for one another. If we have these, I don’t think what is happening should be happening. So, we pray for oneness, love and peace to guide us in this period,” Enwerem said.

Similarly, the Igbo National Council (INC) urged Igbo wherever they are in the northern part of the country to live in peace with their neighbours.