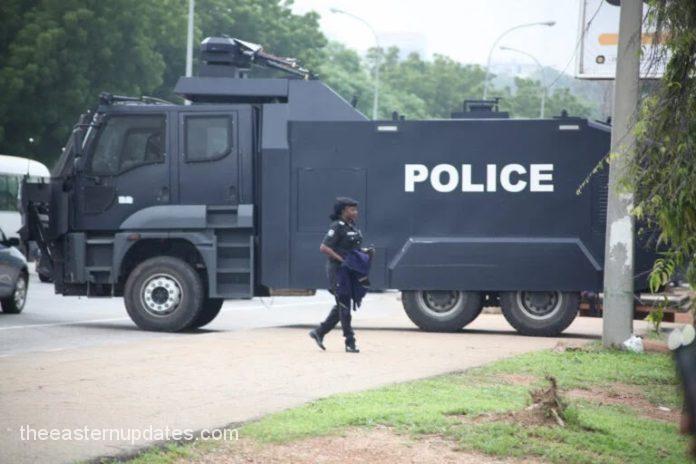 Following the recent crisis which has engulfed the Abia State chapter of the Peoples Democratic Party (PDP), armed police operatives were on Thursday sighted at the secretariat of the party where they have now sealed off.

The Eastern Updates recalls that policemen restricted movement in and out of the secretariat which is located at Finbars Road, Umuahia.

When quizzed by reporters, they were said to be working with ‘an order from above’.

The Publicity Secretary of Abia PDP,  Fabian Nwankwo who spoke to reporters that workers and officials of the party had been asked to observe one-day rest at home.

The Eastern Updates recalls that ahead of the party’s primaries for the 2023 general elections, some members of the People’s Democratic Party (PDP), in Abia State earlier in the week stormed the secretariat of the party in Umuahia to protest against what they claimed were moves by the State Chairman of the party, Asiforo Okere go against the wishes of the party by imposing adhoc delegates on them.
The Eastern Updates gathered that the protesters who called for the Chairman’s resignation, carried placards with various inscriptions, some of which read, ‘Asiforo working for the opposition; Abia PDP a shadow of itself under Asiforo; Asiforo wants to kill PDP; we hate imposition; imposition will not do us any good, NWC act now’ ‘Observe due process, then delegate election is guaranteed’, among others.
One of the protesters who who spoke to correspondents under the condition of anonymity alleged that Asiforo’s body language was favouring a certain ‘anointed’ governorship aspirant from Abia Central Senatorial district.
According to him, ‘Asiforo is doing everything possible to manipulate the process in favour of this retired  Professor to emerge as the governorship candidate of the party.
‘PDP should forget about Abia State if the man emerges as its candidate. We are ready to sabotage the party if they refuse to allow an Abia North person succeed Governor Okezie Ikpeazu,’ he said.
The leader of the protesters who gave his name as Comrade O’Brien made known their grievances included but not limited to the ward 3-man ad-hoc delegate election which was rumoured to have been held yesterday without their knowledge.