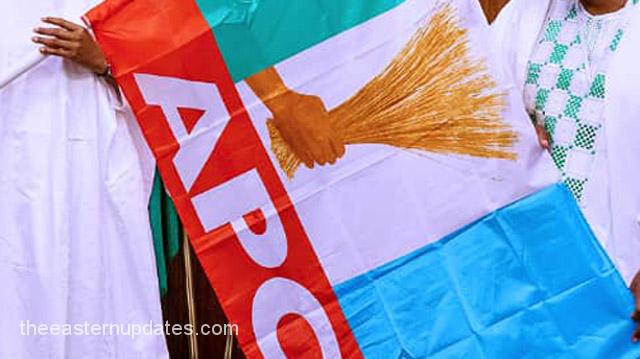 A group of members of the All Progressives Congress (APC) under the umbrella of APC Legacy Members (ALM) has alleged that Mr Francis Nwifuru, Speaker of the Ebonyi House of Assembly is not a member of the party.

The group also alleged that 15 other members of the house sacked by the Federal High Court presided over by Justice Inyang Ekwo who are still members of the People’s Democratic Party (PDP) party were not registered members of APC.

Alhaji Haroun Aja, an APC chieftain who briefed newsmen on behalf of the group on Wednesday in Abakaliki during a press conference said that Nwifuru and the 15 other lawmakers deposed an oath that they are not members of APC and that they have not defected to the APC.

Ajah alleged that there were ongoing attempts by the state officials to smuggle the names of the 16 members of the state house of Assembly into the membership register of APC a few days after purchasing expression of interest and nomination forms.

The chieftain noted that on April 26, expression of interest and nomination forms were purchased for the lawmakers but, in the process of filling the forms, it was discovered that the lawmakers were not properly registered as APC members.

“It is obvious that these nefarious plans to make them candidates of our party when they are not properly registered members of APC will be enough reason for the court to invalidate APC’s victories as was the case in Zamfara state in 2019.

“For a better understanding of this attempt to perfect an irregular process, it should be noted that after the Federal High Court sacked the 16 members of Ebonyi House of Assembly, they filed an appeal at the Court of Appeal.

“It may interest the National leadership to note that in the affidavit of facts sworn to by the lawmakers, they denied membership of APC in one breadth and in another agreed that they decamped from PDP.

He added: “We plead with the National leadership of our great party to use the Ebonyi situation to show that APC is not the haven for irresponsible politicians.”

Aja, who is the Vice-president of the Nigerian Supreme Council for Islamic Affairs (NSCIA) South-East zone said that the legacy members had been trying to make the Gov. Dave Umahi see reasons and imbibe democratic ethos in the running of APC in the state.

“But the governor has continued to shun entreaties to follow the path of equity, civility and fairness,” he added.

“But, we will resolve the issue as members of one family because we in APC, we are one family.

“We are not preparing for courts, the party at the national level is handling this issue,” Nwobasi

Meanwhile, reacting to the allegation, Chief Stanley Emegha, APC state chairman when contacted dismissed the allegation adding that there was no truth in the statement.

He said that the party would not be distracted by statements credited to people who were bent on destroying the party.