HomeFeaturesProperty Worth Over ₦2m Destroyed By Rainstorm In UNIZIK
Features

Property Worth Over ₦2m Destroyed By Rainstorm In UNIZIK 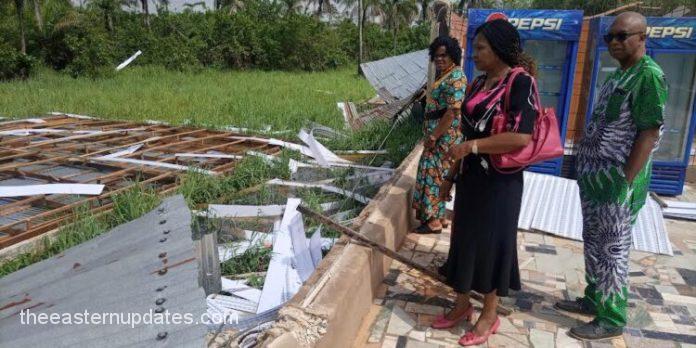 A recreational building which is owned by the Nnamdi Azikiwe University Women Association (NAUWA) cooperative, the bakers of UNIZIK Bread, was yesterday destroyed by a heavy rainstorm.

The Eastern Updates gathered that the roof of the affected building which served a number of purposes was pulled off and flung into a nearby swamp even as some wares being used in the facility were also damaged.

Chairman of the NAUWA board Prof Gladys Ahaneku, while conducting reporters around the scene, lamented the ugly occurrence, saying that the worth of the things damaged by the storm was over ₦2 million.

Mrs Ahaneku disclosed that the ugly incident would pose a serious financial challenge to the firm as the association may have to pull funds from its meagre financial resources to fix the damaged building.

‘So, from end to end, the whole roof was pulled to the other side. Anybody looking at it and knowing what the cost of building materials is in the market now will know that this is nothing less than N2 million,’ she lamented.

Secretary of the board and business chairman, NAUWA bakery, Dr Chito Ekwealor, and a board member, Prof. Stella Okunna, in their separate remarks, decried the situation disclosing that they were saddened by the ugly incident.

‘Honestly, I am still trying to find a word to describe how I feel about this place. It was a very vibrant centre when school was in session. It was thriving and to see it in this condition now, I am speechless.

‘We are devastated. It should be an income-generating establishment and the way it is now, instead of making the revenue, we are going to be spending money on repairs. We are sad to say the least,’ Okunna said.

The rainstorm which occurred on Friday also destroyed several facilities in the school.