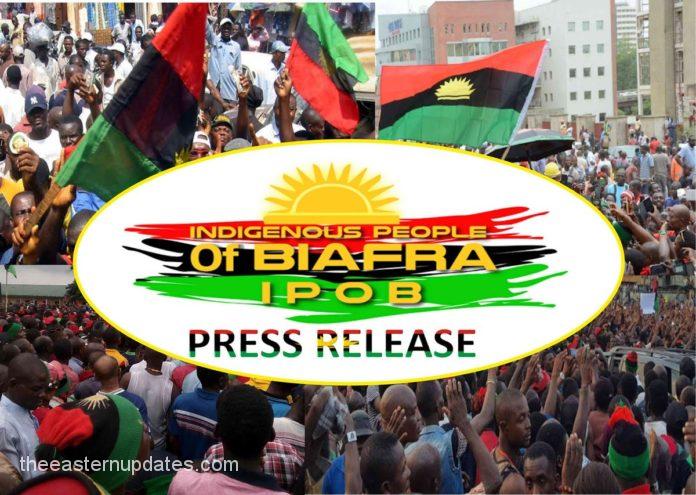 The Indigenous People of Biafra (IPOB), on Monday, condemned last weekend’s burning of the country home of the President-General of Apex Igbo socio-cultural organisation, Ohanaeze Ndigbo, Prof. George Obiozor.
The secessionist group also distanced its members as well its security wing, the Eastern Security Network, ESN, from the attack which took place on Saturday morning.
The Eastern Updates had on Saturday reported that Obiozor’s country home in Oru East Local Government Area of Imo State was razed down by some yet-to-be-identified gunmen.
According to reports, the gunmen used Improvised Explosive Devices (IEDs), as well as petrol bombs to raze down the building.
In their reaction, IPOB warned that those behind the attack on Obiozor were treading on very dangerous ground.
Read Also: IPOB Vows To Avenge Burning Of Supporters’ Houses
In a statement which signed by its spokesperson, Emma Powerful, the group, said: ‘We the global family of the Indigenous People of Biafra (IPOB) ably led by our great leader Mazi Nnamdi Kanu, totally condemn the burning of the house of Professor George Obiozor, the President General of Ohanaeze. This barbaric act is shameful and disgraceful to Ndigbo.

‘There is no gainsaying the fact that criminals behind this cowardly act are those against the liberation of Biafra and the release of our leader Mazi Nnamdi Kanu so as to create the wrong impression that Biafra agitators are violent.

‘Those behind this evil act have nothing to do with IPOB, ESN or Biafra agitation. They are sponsored criminals and must be made to face the consequences of their actions.
‘We don’t consider Professor Obiozor an enemy of IPOB and Biafra struggle. So, anybody targeting him is treading on dangerous ground. He has done nothing to deserve such devilish and wicked attack.
‘IPOB M.Branch unit will stop at nothing in unravelling those behind this dastardly attack.’
IPOB also accused wicked politicians of recruiting criminals to cause havoc across the Southeast.
THE EASTERN UPDATES
Facebook
Twitter
WhatsApp
Email
Telegram
Previous articleOrji Kalu Reacts As Gunmen ‘Bomb’ Obiozor’s Home
Next articleBuhari Frowns At Violence In The Southeast, Consoles Obiozor