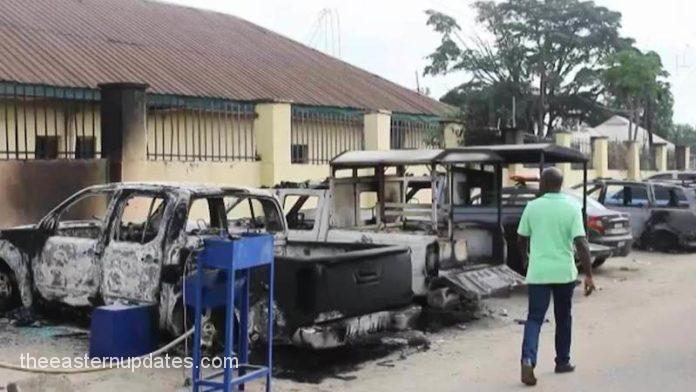 The Eastern Updates gathered that the attack by the hoodlums left two Police operatives dead and a few others injured.

One of the operatives who’s name was given as Ifeanyi, who hails from Umuguma, was said to be a final year student of the Imo State University.

The gunmen invaded the station during the early hours of Saturday at about 4:30 am while the operation lasted over 30 minutes.

He said ‘nobody slept here, we were scared to leave our homes but we knew it was a heavy bombardment. Unfortunately, they killed our own brother, Ifeanyi who was trying to defend the station and his people by extension’.

The sources said they overwhelmed the security operatives during the operation which left cars and properties destroyed.

The Imo State Police Spokesperson, Michael Abattam while confirming the attack maintained that no life was lost and no firearm was carted away.

The attack was carried out by gunmen in the early hours of Saturday.

Abattam disclosed that the hoodlums who came in vehicles threw petrol bombs in the house damaging properties.