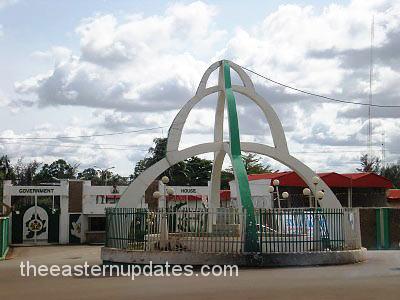 The eight members of the Ebonyi State House of Assembly elected on the platform of the Peoples Democratic Party (PDP), have warned the embattled speaker of the house, Mr. Francis Nwifuru and 14 others who defected to the All Progressives Congress (APC) to cease from parading themselves as members of the House.

This is as they declared that a new leadership of the House will very emerge soon, while also adding that a Federal High Court judgement which declared the 16 APC lawmakers sacked remained valid and must be adhered to.

Mr. Oliver Osi, who spoke on behalf of seven other PDP lawmakers, stated this during a press briefing, in Abakaliki which was monitored by The Eastern Updates on social media.

According to him, ‘It’s no longer news that on March 8, 2022, the Federal High Court sitting in Abuja and presided over by Justice Inyang Ekwo, in a landmark judgement , ruled that 16 persons who are that time were members of the Ebonyi State House of Assembly had ceased to be members of the House having abandon their mandate and resigned their membership by their voluntary defection from the PDP to the All Progressives Congress, in November 2020. The effect of this is that the following persons, from the date of the ruling if March 8, 2022, are no longer members of the Ebonyi State House of Assembly: Hon. Francis Nwifuru; Kingsley Ikoro Ogbonna; Benjamin Ezeoma; Onu Nwonye; Nkemka Okoro Onuma; Anthony Nwegede; Chinedu Onah; Chinedu Awo, among others.

‘It is pertinent for the general public , particularly , Ndi Ebonyi to note that up till today, March 16, 2022, the judgement has neither been successfully appealed nor has a stay on execution granted in respect of same.

“However, in a deliberate attempt to undermine the judiciary and ridicule the extant ruling of His Lordship, Justice Ekwo, Hon. Nwifuru, aided by the police personnel of Ebonyi State, led 14 others if the aforementioned former members (excluding Hon. Odefa Odefa) to invade the hallowed chambers of the the Ebonyi State House of Assembly, purportedly declared vacant the seats of three members (Victor Aleke; Mrs Franca Okpo and Ali Okechukwu), then adjourned sitting for three months.

“The House has since instructed its legal team to commence contempt of Court proceedings against the aforementioned imposters.

‘We make bold to say that neither the former speaker , Hon Francis Nwifuru nor indeed any of the aforementioned former members of the EBHA possesses the power, authority or right to declare the dear of any member vacant or to adjourn the sitting of the House or act howsoever in the office of the Speaker or member of the EBHA, having resigned their membership and being validly removed from office by the extant judgement of a Court of competent jurisdiction.

The APC senators are yet to respond to the latest claims by their PDP counterparts.