HomeFeaturesPanic As Gunmen Kill Mother, Daughter, 2 Others In Abia
Features

Panic As Gunmen Kill Mother, Daughter, 2 Others In Abia 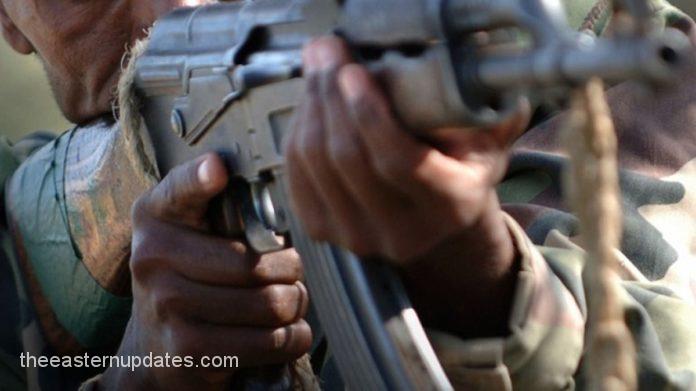 Four people, including a woman, her daughter and two men were, were among the casulties yesterday when gunmen stormed Amangwu village in Ohafia, in Ohafia Local Government Area of Abia State.

The killings were said to have been as a result of a crisis that erupted in the area between two factional groups of unknown gunmen taking refuge in Amangwu community.

One of the rival groups is reportedly led by one Isi Bridge (Bridge’s Head).

Those allegedly killed were a woman identified as Ucha Ndukwe, her daughter, Inyang Ndukwe, said to have returned from Lagos, Ndubuisi Ndukwe and Kalu Umah.

Confirming the incident, the chairman of Ohafia LGA, Dr. Okorafor Ukiwe, who spoke to journalists from the Federal Medical Centre (FMC) Umuahia, where he said he went to see the hospitalised victim, said that the injured person’s mother and sister were killed by the gunmen.

Dr. Ukiwe said: ‘The injured lady lost her mother and sister who were shot alongside her in their house by the gunmen.

‘I am just leaving the Intensive Care Unit of FMC, where I went to see the female victim who is battling for her life. She has just been operated on to remove the bullets  in her body. The gunmen killed her mother and her sister in their house after they (hoodlums) burnt down her mother’s shop.

‘From information available to us, the problem is that a fight broke out between members of two ESN factions in the village.

‘They went to her shop and burnt it down, came to her house and gunned her down and when two of her daughters came out, they (gunmen) shot them.

‘One died on the spot while the other one who sustained bullet injury was rushed to the hospital and is receiving treatment at the intensive care unit. Two other boys were also killed by the gunmen.’

The Ohafia LGA boss, who disclosed that his council had concluded a security meeting, vowed to ensure that the families of the deceased will get justice.

Meanwhile, the LG chairman assured that security agencies in the area were on top of the matter and would fish out perpetrators of the barbaric act.