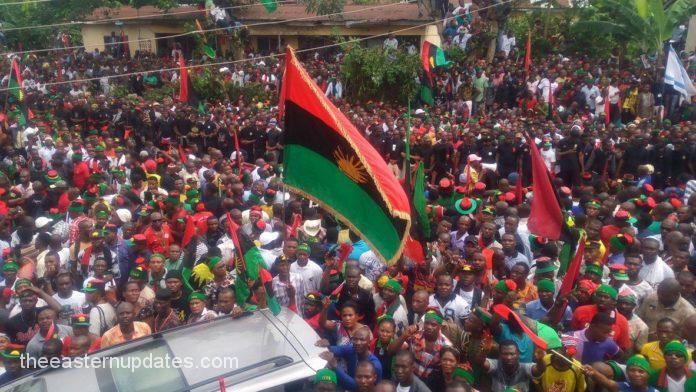 A High Court of the Federal Capital Territory in Gudu District of Abuja has ordered the Inspector-General of Police and its Intelligence Response Team (IRT) to immediately and unconditionally release a detained member of the Indigenous People of Biafra (IPOB), whose name was given as Jude Obasi.

While asking the IGP and the IRT to immediately tender an unreserved apology in two national Newspapers to Obasi, Justice Modupe Osho-Adebiyi consequently awarded the sum of N5 million as reparation for the gross violation of the fundamental Rights of Obasi.

The court gave the judgment in a fundamental rights enforcement suit filed by his team of lawyers led by Ifeanyi Ejiofor.

Obasi was said to have been arrested on the night March 31 2021 from his residence at Nnewi, Anambra State on suspicion of being a member of IPOB and kept in their solitary confinement
without access to his lawyers, relatives and family members.

Read Also: We Can No Longer Confirm The State Of Kanu’s Health – IPOB

Reacting to the judgment, Ejiofor said every mechanism would be put in place to ensure that the judgment was obeyed.

He said, ‘Be assured that we shall activate all the machinery of the law to ensure that this judgement is obeyed to the letter and most promptly.

‘There is no hiding place for a golden fish. This is an order of the court and it must be obeyed, and terms stipulated thereat must also be complied with in full.

‘We return all glory and adoration to the Almighty Chukwuokike Abiama for this feat, as we are still sojourning in this special month of uncommon victory. We are winning.’

Meanwhile, the members of the Indigenous People of Biafra (IPOB) has raised an alarm over the health status of its leader, Nnamdi Kanu who is currently detained by the Department of State Services (DSS).

In a statement by the group spokesperson, Emma Powerful, on Wednesday, it also raised doubt about the existence of Kanu.

According to Powerful, this followed the refusal of the DSS to allow its legal team and members of his family access to him on Thursday when they visited.