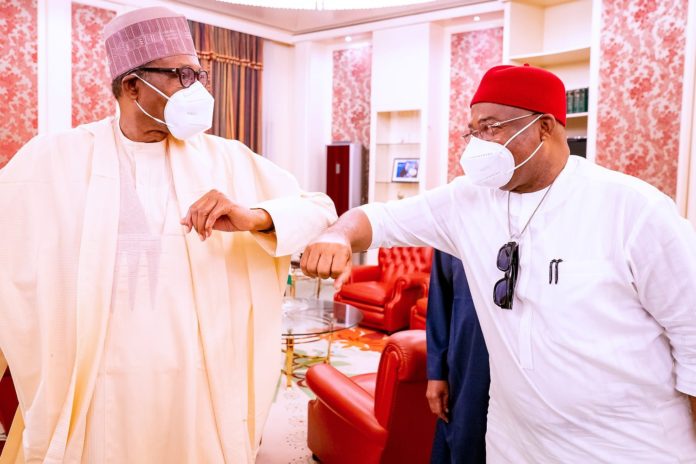 The Governor of Imo State, Hope Uzodimma on Tuesday visited President Muhammadu Buhari at the State House in Abuja over the insecurity bedeviling the State.

The governor told journalists at the State House that his meeting with the President was focused on security challenges and governance-related issues in the state.

‘I came to brief Mr President on the various developments in Imo State as regards security and governance.

‘I had a very quality audience with Mr President and I used the opportunity to make some requests to assist us to ensure that the security in Imo State is stable and the fight against banditry is sustained. So that people can go about their businesses without fear of molestation,’ the governor said.

Read Also: I Am Not Running For President, Uzodimma Clarifies

While concerning the February 26 national convention of the ruling All Progressives Congress (APC), Governor Uzodimma pointed out that there is no intention to move the date of the event but there is nothing wrong if it is moved.

He noted that instead of anyone building concern over little issues as regards the date of the convention, the focus should lie in building a better and workable democracy in the country.

He maintained that the discretion on how and when the party’s convention will hold is an internal party affair and any of the modes including consensus can be adopted to elect officers.