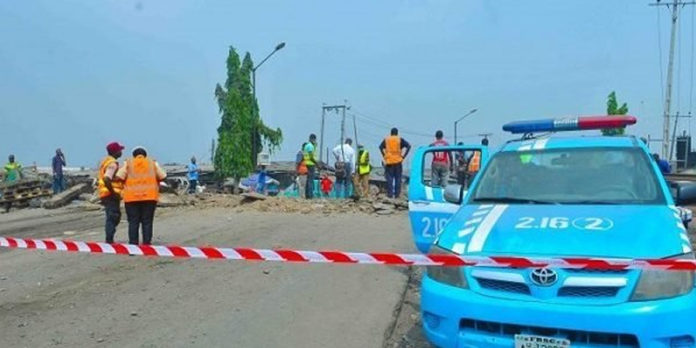 A multiple auto crash occurred at the Asaba Park, Upper Iweka by Awka-Onitsha Expressway on Sunday claiming at least two lives and leaving several others with various degrees of injuries.

The Eastern Updates gathered that about five vehicles were involved in the crash which was attributed to brake failure.

According to an eyewitness account, a DAF truck driver with registration number XC 416 PK, lost control as a result of brake failure and rammed into other vehicles before.

About 22 people, comprising 13 male adults, seven female adults, one male child and one female child, were involved in the crash.

Two people died in the accident while 11 people sustained injuries.

As of the time of filling this report, the injured victims have been rushed to the Toronto Hospital, Boromie by the Federal Road Safety Corps rescue team.

The two male adults were confirmed dead by the doctor on duty.

The deceased’s corpses have been deposited at the hospital mortuary.

The state Sector Commander, FRSC, Adeoye Irelewuyi, commiserated with the family of the dead victims and prayed for the repose of their souls.

He urged motorists ensure that their vehicles comply to minimal safety standards before driving.

‘Traffic rules and regulations must be obeyed at all times,’ he added.

The Eastern Updates reports that many accidents in various parts of the country have often been attributed to over speeding which often leads to break failure.