HomePoliticsWe Would Frustrate The Return Of Ebubeagu, IPOB Vows
Politics

We Would Frustrate The Return Of Ebubeagu, IPOB Vows 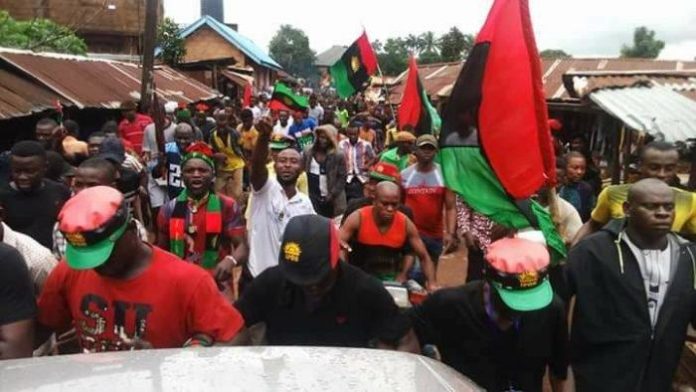 The Indigenous People of Biafra (IPOB) has pledged to do everything within its power to resist any attempt by the South-East governors to launch the proposed the Ebubeagu security giving its reasons.

While reacting to the wake-up call on the governors which was made by Ohanaeze Ndigbo to make the security outfit operational before the end of the year, IPOB countered them insisting that its arm of security, the Eastern Security Network (ESN), can never work with Ebubeagu.

In a statement by its spokesperson, Emma Powerful which was made available to The Eastern Updates, the IPOB stressed that ESN cannot co-exist with Ebubeagu.

Powerful alleged that the new outfit is a traitor responsible for the death of most of their members.

He further alleged that Ebubeagu is only being used as a spy by the South-East governors to cause tension in the zone and later blame it on IPOB.

‘The attention of the global movement and family of IPOB, under the command and leadership of our leader, Nnamdi Kanu, has been drawn to the laughable call by Ohanaeze Ndigbo President General, George Obiozor, on South East governors to re-establish the ridiculous, weak and unpopular Ebubeagu security outfit that has never been able to confront the bandits terrorising our ancestral land but only good at humiliating innocent Biafra youths with the collaboration of security agents.

‘We want to make it categorically clear to Ohanaeze Ndigbo and its co-travellers that any attempt to re-establish Ebubeagu security outfit in South East will further worsen the precarious security situation in the zone.

‘They should understand that our ESN operatives have been sacrificing so dearly to secure our ancestral land.

‘But instead of complementing the efforts of ESN and IPOB to secure and defend our land against terrorists masquerading as herdsmen, these saboteurs disguising as Ebubeagu security operatives give information on ESN to the Nigeria security agencies. Because of this treachery, IPOB and ESN cannot operate together with Ebubeagu with undefined mission.

‘It is on record that South East governors have ulterior motives in forming Ebubeagu security outfit and we have not seen them as a sincere outfit to secure or protect our mothers, wives and sisters in the whole of Biafraland.

‘South East governors have no plan to protect our land but formed Ebubeagu to attack ESN and IPOB members. Obiozor and Ohanaeze Ndigbo should not set Igboland on fire.

‘ESN/IPOB are ready to resist them anytime they are re-launched, and Biafrans should hold Obiozor and Ohaneze Ndigbo responsible for anything that happens. They will regret any attempt to resurrect or re-launch this treacherous outfit that has sabotaged our march towards freedom.

‘Many IPOB and ESN operatives tracked and killed were done by Ebubeagu sponsored by South East governors and this time around, it is not going to be business as usual. Our intention has never been to attack our people or innocent people except Fulani terrorists masquerading as herdsmen and rampaging in our territory,’ Powerful said.

Meanwhile, the Governor of Imo State, Hope Uzodimma, last Saturday revealed that 18 suspects arrested by security agencies have given dependable evidence on the names of sponsors of insecurity in Imo state, adding that their names will be made public on 3 January 2022.